Four shelters and one water tank destroyed in Tubas

January 16th 2016 | Jordan Valley Solidarity | Tubas, occupied Palestine
At 6 am on 14th January  2016 the Israeli occupation army entered Tubas area, with twelve jeeps and two bulldozers, destroying four shelters and a water tank.
In December 2015 the army gave the order for demolition of the shelters, obliging the owners to restore the land to the condition it was in before the construction, within the following 45 days. While the court process was ongoing and the deadline has not expired yet, the army raided the area and destroyed the shelters. Two of the four shelters were owned by Ali ‘Amabusi and Mahmoud Alidib Mashamani, both of them living in Tubas.
Military forces claimed the area as closed military area, but by law they are not permitted to enter Tubas and give demolition orders as it is Area A under the Oslo accords, and therefore under full control of Palestinian Authority.
In the morning a water tank was also destroyed. It was supplying water to the village of Yarza. The demolition left 100 people without water and with them farms and plantations, which are the main economy of the families.
The water tank was built with the fund of the Italian Christian Solidarity and the volunteers of Jordan Valley Solidarity in 2013-2014. Its purpose was a development project for the area, allowing people to return and help the ones who don’t have access to the water to grow plants and animals.
The water was provided from the city of Tubas and the village of Alibkea, but the pipe going from the tank to the village of Yarza was previously confiscated by the occupation army 8 months ago. 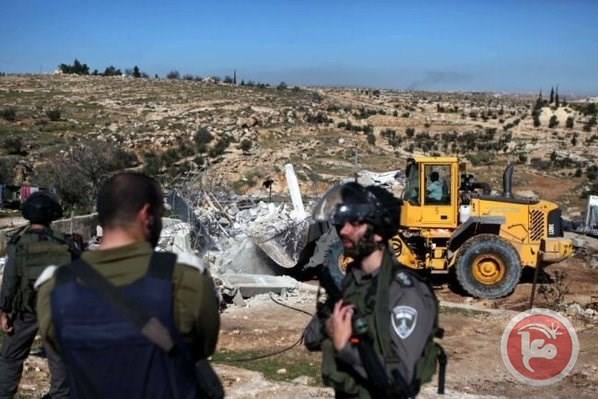