Three days ago, the ISM visited the Old City in Jerusalem to talk with different Palestinian residents who live and work there and see what the situation is like nowadays.

Harassment by the Israeli Police, particularly on the youth, is a constant burden. Every day, police are seen stopping youth in different corners to body check them and look at their ID’s. These actions, normally ignored by passersby and tourists who wander in the streets of the Old City, produces in contrast an enormous feeling of tension and threat on the Palestinian youth, since every movement or action they make is being permanently controlled. 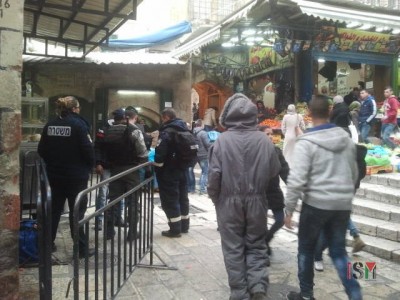 A parent advises his son, “When they check you, remain cool, don’t get nervous or upset. Don’t give them any reason to attack you, because in the meantime, the soldiers are looking for targets.” 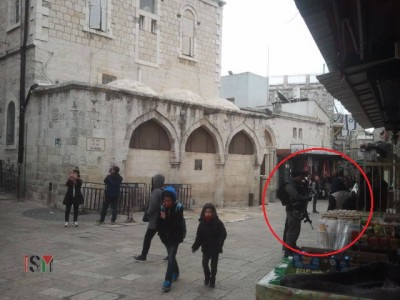 Palestinian youth getting checked by the police

There are about 9 intersections in the Alwadi street with three to six soldiers standing in each intersection, stopping people and checking everybody’s movements. Palestinians get checked every time they walk in these corners. You can hardly see any tourists on this street and shop owners comment on how badly their businesses are doing.

Since the beginning of October, after Mohannad al Halabi carried out a stabbing attack and was immediately killed afterward, the Israeli authorities began harassing the shop owners of the area, blaming them for not preventing or aiding the soldier and settlers who were attacked. But this blame is completely unjustified, as one of the shop owners told the ISM. It was the end of the day, most shops were already closed and they were back home with their families in the night. He recalls hearing the news in the television. But even if they would have been present, people are very scared when these things happen.

The shop owners in Alwadi street are very exhausted with the situation. Nobody really wants to continue talking about this, after giving so many interviews to the international media in October, they feel tired and hopeless. Nothing has changed for them, and they don’t really want to remember the incidents.

The shop owner who talked with us, and who prefers not to give his name, gives us an example of the daily harassment they face. “Just today in the morning, a costumer who was sitting in the restaurant across the street, was smoking a cigarette. The Israeli police came inside and gave the owner a fine of 1.000 shekels. Not long ago,” he continues, “They gave a fine to the owner of a close by coffee shop of 6.000 shekels because he did not have a non-smoking sign on the window.”

“But as you can see, he hardly has any costumers and doesn’t have the money to pay this. Then the police came and confiscated the sign with the coffee shop’s name, and demanded he must pay another 500 shekels on top of the fine. They do not apply these policies to Israeli shop owners.”

Just like in Alwadi street, the shops around the Church of the Holy Sepulcher find themselves at risk of being bankrupt. The situation is the same for all Palestinian shops: now, they close earlier than usual, and more and more shop owners are finding themselves forced to close permanently and get low-wage jobs inside of Israel.

The harassment provoked from young illegal Israeli settlers is also notorious. They walk on the streets making provocative comments to Palestinians who, on the contrary, try as much as possible to stay calm. They know that if they answer back and a fight starts, the Israeli police will immediately go after them. Everyone is aware that the Israeli settlers are completely backed by the police and, as the shop owner who talked with us said, “Its very easy to just shoot you and place a knife next to your body, claiming you intended to stab someone.”

All this harassment and the boycott of their businesses are intended to produce pressure on Palestinians and make their life difficult enough so that they feel forced to leave Jerusalem. 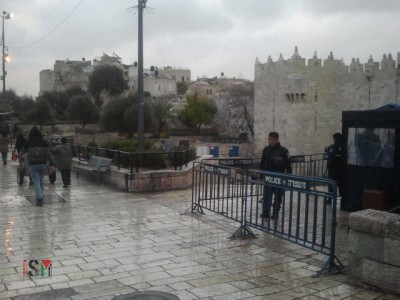