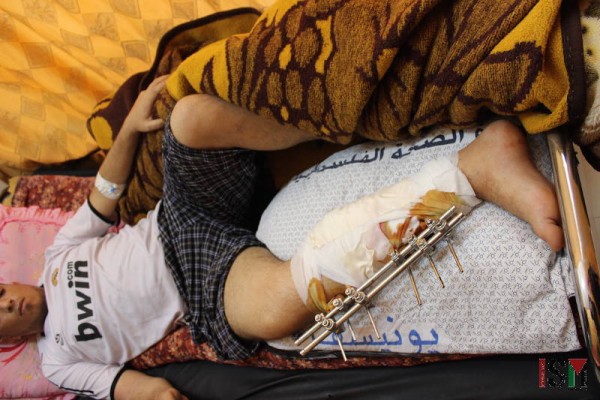 Ahmad has to undergo a second surgery soon

Last week, during the demonstration at Karni Border Crossing, Ahmad Nabil El-Akhsham (28 years old) was shot in the leg. He was there, as he had been every Friday since the beginning of October. At some point he and the other protestors saw a female IOF soldier pointing her gun at them and immediately he felt a very intense pain in his leg, “it was as if I was receiving a 1000V electric shock”.

The next thing he remembers is that the other demonstrators where carrying him towards the road where the ambulances were waiting. The ambulance couldn’t reach them because the soldiers were shooting towards the medics if they approached the demonstrators.

He arrived unconscious to the hospital, due to the heavy loss of blood. After a first surgery, the doctors explained that the way ha was carried to the ambulance highly aggravated the injury, as he was carried by a group of unexperienced youth who were mostly trying not to get shot.

The shot blew away all of his calf and broke his bone in many small pieces. During the first surgery, they put 5 metal bars in order to try to save his leg. Next time the doctors will try to perform a graft  in order to reconstruct the calf.

We asked Ahmad why he kept on going to the demonstrations, and this what he said: “We must show that the people in Gaza, West Bank and the 48 lands are all the same, we are all Palestinians and we are united. We fight together for our land. I’m not afraid of dying for my land”.