On November 3rd, two demonstrations took place in Tulkarm. In the city center, children gathered to protest against the incarceration of their loved ones in so-called “administrative detention”, where they’re held without trial for indefinite periods. The children were singing and chanting in the street. Their parents, teachers and friends gathered around along with internationals, waving Palestinian flags and showing their support. 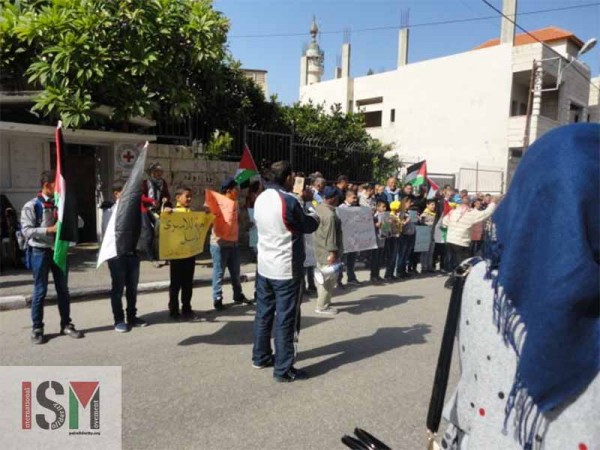 Children demonstrating against detentions in the city center of Tulkarm

About an hour later, around 30 people went outside the city center to protest against the apartheid wall and the illegal Israeli occupation. Protesters and international human rights observers marched together towards the wall, clapping hands and singing slogans. They arrived close to the two high fences and the gate, which is part of the apartheid wall in the area of Tulkarm.

A military jeep from Israeli forces was waiting on the other side of the wall when the demonstration arrived. Three soldiers went out, shooting live ammunition in the air and shouting at the protesters to leave. Chanting and clapping continued among the demonstrators. The Israeli forces called for reinforcement and another military truck arrived. Nine soldiers gathered by the fence and started to shoot plastic-coated steel bullets into the group of demonstrators. A Palestinian woman was shot in her knee, and a man leading the chant was shot in his legs twice. Both were taken to hospital and another person took over the megaphone and the lead of the chanting. At least two other people were also hurt by bullets at the time. 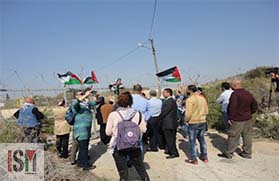 Protesters in Tulkarm against the apartheid wall

The Israeli forces continued their repression by throwing teargas and stun grenades over the fence onto the Palestinian land. After making several attacks, they locked up the gate and went through the wall, up to the protesters. Soldiers started shoving and shouting at people, particularly attacking the person with the megaphone, pushing him violently. They shouted at people to move back and started once again to throw teargas and stun grenades towards the demonstrators.

Despite the military violence, the demonstration went on peacefully all the way through.