In Heather Christle’s stirring poem, Self Portrait with Fire, bending to conceal flaming legs, (s)he sets the grass on fire. On this day, sitting with Khader Adnan, Palestinian freedom fighter, it is hard not to imagine everything in contact with the intense and pensive man beside me catching flame.

Khader Adnan, a baker, a student of economics, a father and a former captive of Israeli occupation prisons has brought himself to the brink of death by starvation twice in protestation of the illegal system of jailing of occupied Palestinians termed Administrative Detention.

During the latter of the two strikes, the sight of the world sharply dove in freefall to one hospital bed in one Israeli hospital to one prisoner who was in critical condition but with enough wherewithal to persist in his fight- he set the grass on fire.

In the chaos of the recent escalation of violence in the West Bank that frequently comes to flash fever pitch crescendos punctuating Palestine’s days and her nights, Khader Adnan speaks. “Let me ask you a question,” he begins, referencing the allegations of Palestinian knife attacks on settlers and Israeli occupation soldiers, “Why would an educated young person with so much ahead of them take a knife and attack someone only to be immediately killed but for the pressure, the frustration and hopelessness of the situation they are forced to live in?” 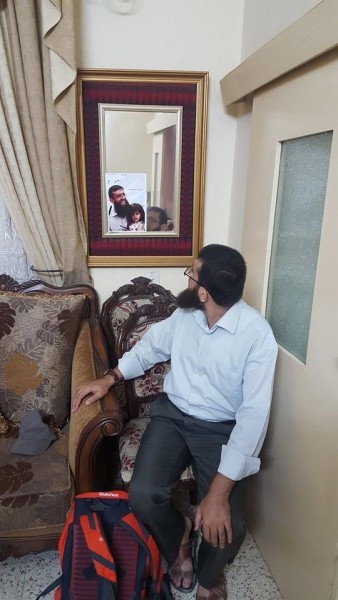 Khader Adnan looks in a mirror at himself at his home

Hopelessness. His words bring to mind the gut wrenching twitter post from the young Palestinian martyr, Ihab Jihad Haninni (20) who was shot and killed on Friday, October 16 by occupation forces at Beit Furik checkpoint, “Perhaps tomorrow will be better than today, God willing.”

It is a shared devastation that settles heavily over the Palestinian landscape littered with the places the young have gasped their final breath.

For Ihab and the many others who were martyred before him- and for those martyred since, Khader’s lionizing words honor them, “The best houses in all of Palestine are the houses of the martyrs.” Words that flow in direct inverse of the Israeli government’s currently enacting illegal collective punishment procedures against the families of the martyrs by delivering their homes demolition orders; some which they will fill with concrete, some they will smash into with bulldozers. 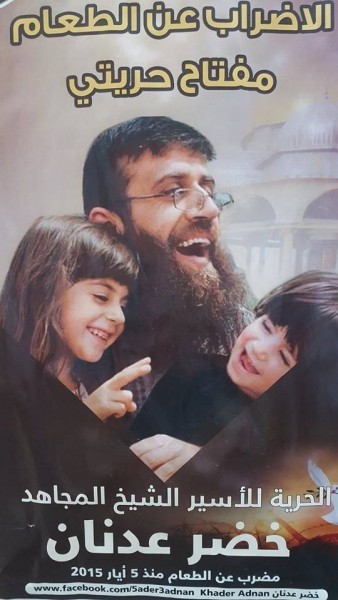 Khader Adnan Poster: “If the people of the world had a heart for the suffering of Palestine, this would be the photo of the year.”

For a state with no organized military force by land, air or sea; a state webbed by the ever developing strands of illegal settlement and industrial blocs, by siege, by rabid, occupational government sanctioned racism, by hopelessness; hunger strike has been the Achilles heel of the mighty apartheid state delivered in what Khader termed the battle of the empty stomachs.

Having so little left and seemingly being ignored by the mainstream world media, it is through refusing what little remains which succeeded in allowing the hands of Palestinian suffering to touch the outer world. Hunger striking works. “Some think being jailed is a destiny but I say freedom is a destiny and you attain freedom through hunger strike,” Khader affirms.

Indeed, it is likely the only reason he sits across from us with his young daughter, still jailed within the occupation of the West Bank yet free from the jail within the jail.

Khader’s hunger strike was, “for the purpose of freedom. I didn’t strike to change anyone’s attitude about the situation here. It was for freedom.”

His hunger strike’s both came after enduring multiple stints on Israeli administrative detention which both involved what Khader called, “hideous and aggressive treatment” by his captors. During his July 2014 arrest, an arrest which was executed against the backdrop of a brutal bombing attack against the already besieged Gaza strip, Khader was subjected to humiliation and brutality.

“They cursed my honor as a husband and a father. They made sexual comments about my wife, cursed her. Cursed my religion, threatened my children. They rubbed their hands on the bottom of my shoes and rubbed the dirt on my face. I was slammed against the wall until my nose was bleeding. They blindfolded me. They pulled hair out of my beard.”

Is there any reason that this type of abhorrent treatment is completely allowable for Palestinians, including young children who frequently report these types of abuses, yet are protected against in the western world? Are we quantifiably more human? Unless the answer is yes, this should stir the world into mass resistance.

Amidst a hypocrisy so shrill, a terrorism enacted so horrendously as last summer’s Operation “Protective Edge”, Khader was again placed on administrative detention for nearly the tenth time. “They thought then was a good time to arrest me because everyone was so busy paying attention to the bombing in Gaza that no one would care about another Palestinian going to jail, especially one who was known for hunger strike.”

“I told representatives in the west bank that I was going on a hunger strike. I did small hunger strikes. I did a 7 day strike- to hit the alarm.”

And predictably, the unchecked Lord of the Flies like behavior of those made mighty with guns and global funding escalated in violence and antagonism, “Once I went on hunger strike, treatment was worse. Abuse was worse. They escalated so I escalated. I refused to eat, I refused to drink and now I refused to speak. Not speaking was an escalation. They interrogated me and I said nothing.”

And inside of the hospital room where Khader Adnan, whose condition was becoming critical once his strike climbed into the high forties in days, lay weak and shackled, refusing to allow visitation by physicians after being told that he would not be granted visitation unless under the watchful eye of Israeli military personnel. And though weak and near death, antagonism from the gleeful choir continued.

“It was an annoyance of no privacy, the Israeli guards and soldiers inside my room were constantly talking about military plans and thoughts while I laid there. They brought their food into my room, ate hot meals beside my bed and talked about delicious foods and spices, things to make me uncomfortable and hungry.”

Even more repugnantly, “There was a camera in my room filming me all day and night. This was not for my protection. They were violating my privacy and trying to humiliate me. I was told that photos and video of me was being broadcasted on Israeli television; that they were watching me like a live television show. Dehumanizing me.”

The extremist right wing Israeli Yesh Atid and Likud parties in response, finalized an earlier version of a force feeding draft law, a law that would involve the intravenous intrusion or gastric feeding tube insertion into an unwilling Palestinian hunger striking prisoner’s body to undermine their starvation protests against what is, in fact, a widely recognized illegality and violation of human rights.

The committee, headed by Likud MK Miri Regev, was blasted by many, including MK Ahmad Tibi (Ra’ am-Ta’al) who stated that “Today is a black day for the Knesset.” As well as another Arab Israeli MK, Basel Ghattas of the Balad party, who said the bill was an “idiotic law by an idiotic prime minister.”

When asked about whether he feared that he might be subjected to what is tantamount to torture, Khader stated, “I did not think that they would use this tactic on me because I was under 24-7 observation.”

As for the law itself, “I see it as a failure for the Israeli government. This was and is a failure in them knowing how to deal with this process. And of course, this failure faces the success of the process as a whole- how hunger strikes gain awareness, how they raise empathy for those inside occupation prisons.”

“Without hunger strikes, prisoners do not get released. The propaganda and lies coming from Israeli and the western world is something people have to break away from. Come and visit Palestine. See the situation for yourself. See the real crime happening here and who is committing it.”

Khader’s father who watches over the interview and walks us through the streets of the village Arraba as the sun falls on another day in occupied Palestine leaves us at the taxi with these words, “Tell the truth. Tell the people what Israel is doing,” before abruptly walking away. This man, this elderly man who has spent his life grappling with a force that has, with entitlement, claimed all he ever had, including his son who nearly lost his life twice resisting it.

Christle’s poem occurred to me throughout the interview, an interview with a beloved son of a beloved land. The poem referencing, in regards to the person on fire, the adoration of the people; “Obviously they loved me, were warm and pink and vocal on a promising spring day…”

Inshallah the spring day is soon coming. Promisingly so.