New
Home / Features / In Gaza no figures can express the sorrow

In Gaza no figures can express the sorrow

If there is any reason for our existence, at least it should be our capacity to inform about a story while it is happening, in a way that nobody can say: “We did not know, nobody had told us anything”

I don’t know if pain can destroy or fortify, I only know that pain changes everything. I also know that the recollection of such suffering shall remain, has to remain in my memory. At the beginning of the Israeli aggression, the first days of last July, I had promised myself not to forget the names of the children that were killed, those who I photographed horrified in the nightmare’s morgues in Gaza under fire.

In that moment I didn’t know that it would be impossible to keep that promise. More than 500 names of children, destroyed by bombs should be now pronounced by my voice, one by one. However, I do not forget, I can not nor want to forget.

The crimes and brutality do not deserve forgetfulness nor forgiveness, only rage. An unmitigated rage that drives us to act, to fight to prevent that their murders go unpunished, so that death won’t be in vain, even though the death of children always is. They are gone, we cannot bring them back to life, but we can, have to punish their executioners.

It is 10 am and several drone’s fire impact onto a house in Deir Al Balah while a Bulldozer recovers the remains of a family, buried under a one-ton bomb dropped by a F-16, those that leave craters, smoke and smell of death, where before were homes, affections, dreams, lives. 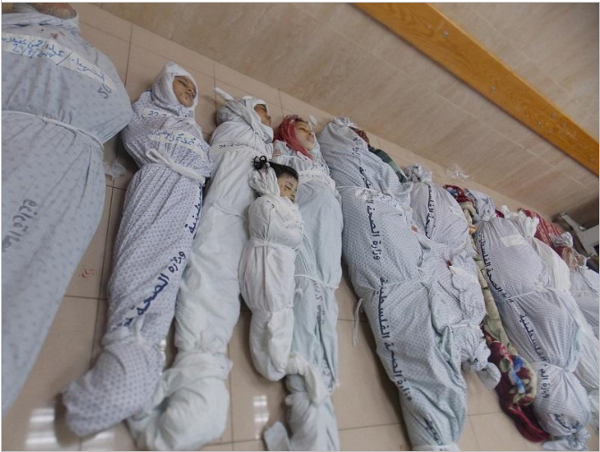 The ambulance fills with wounded persons in seconds, a man enters carrying a small body of a child about six or seven years old, the boy lacks the right calf, his foot is hanging from a tendon or a shred of skin, I don’t know, I don’t want to look, but I do.

The boy squirms and his intestines are out of his belly, I help the man to lay down the child on the floor of the ambulance – the only stretcher is already occupied by another injured person. The ambulance drives fast to the Al-Aqsa Hospital, located in the central area of the Strip, the same hospital that has been attacked by Israel leaving seven dead and over seventy injured.

At each turn the child’s blood is spilled on the floor of the ambulance, I put my hand over his eyes to prevent him seeing his own intestines, I don’t want to see them either, or step on his blood; I don’t want to see his father mourn and cry in despair. But who cares about what I want? What his father wants? With all the impotence of his anguish, with all the force of his love, everything is banal, useless, tiny compared to death. 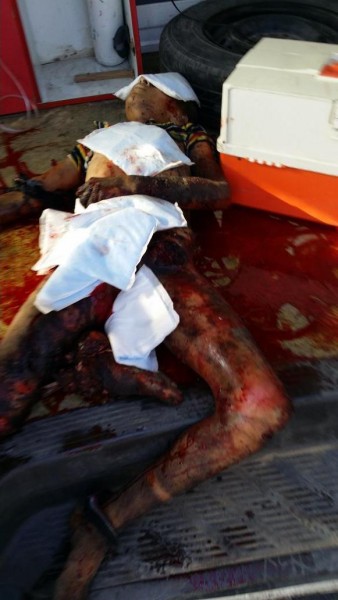 The murderers do not care about anything nor the world. For Israel it is easy to kill, Israel is massacring children for free.

A man in the ambulance asks, demands the father to pray, and then they start to pray together, everybody who can articulate a word inside the crowded vehicle prays, I don’t do it, I don’t know how, I just hold his light head of shaved hair in my hand with the other I still cover his eyes.

I look at him and strange details are recorded in my mind, terrible and tender ones. His little face is beautiful despite the agony that deforms his face. I think he has his hand clenched into a fist because of the pain then I look again and it is not a fist – the Israeli bomb has torn all his fingers and the little bones are now protruding from his knuckles, they are fragile, white and thin, like those of a bird.

The boy stops squirming slowly and his lips turn pale, I’m relieved that he is no longer struggling, that his intestines stop escaping from his belly, I’m relieved by this calm so close to the end, it relieves me so much that I feel guilty. Till this day I do not know his name, I only know that he died minutes after arriving at the hospital.

“On the ruins of my house I hoisted the Palestinian flag, it is our symbol of resistance,” tells me Ahmed without any drama and then smiles, “now my family lives in a crowded shelter in a school”.

Less than a block away, in Beit Hanoun, seven little girls are sitting on a rickety mattress under a makeshift tent, here called “Jaima”, located next to some rubble that once was their home. Through an unstable triangle of collapsing walls the girls enter into this concrete tomb to retrieve a doll, rescued from an abyss of desolation and then smile.

The joy, that bombproof joy, I think amazed, resists death in Palestine, and sometimes just sometimes wins the battle, and if it doesn’t win at least dignifies it, dignifies and saves it from brutality and impunity.

More than 100.000 people have lost their homes under the Israeli bombs that devastated Gaza during the fifty one days of cowardly attacks.

Shelling from F-16s, Apache helicopters, drones, tanks, mortars and all the machinery of war they have – thanks to the support of the so called western democracies – the occupying entity sadly known as Israel uses machinery of war that allowed them to raze entire neighborhoods from the infamous distance of their powerful ships, but did not allow them to defeat the Palestinian resistance in the field, in a man to man combat because that requires that there were men on both sides. The courage and love for the land cannot be purchased with US Dollars in the arms market.

Zionist aggression caused a real slaughter, the almost 70 years of Israeli occupation still remains and it will continue causing damages and death mainly among women, youth and children, as Israel’s military objectives are always homes, mosques, schools used as shelters, ambulances. That’s where those perish who had previously survived the cowardly brutality of Israel, to die after, to continue dying a thousand times in this slaughterhouse called Gaza.

The numbers speak for themselves but today I cannot contain human suffering into figures. Sorrow is not measurable, sorrow is just that and it is everything.