A 52-year old Palestinian man was arrested at Shuhada checkpoint in al-Khalil (Hebron) yesterday, for ‘not obeying soldiers’ orders. Israeli forces painfully handcuffed and blindfolded him.

Around 1:30 pm, Hisham Azzeh walked through Shuhada Checkpoint in order to reach his house that is located up the hill next to the illegal settlement in Tel Rumeida. At this first checkpoint on his way home, Hisham passed through the metal detector without it beeping to indicate he had to go back and pass again. Therefore, he continued on his way, but Israeli soldiers yelled at him to go back and pass through the checkpoint again for no reason.

When he did not immediately comply with the soldiers orders, they arrested him. Israeli soldiers painfully handcuffed him with his hands behind his back with plastic handcuffs, without any regard for a recent operation on his hand. The soldiers also blindfolded him, so he was unable to see what happened to him and where he was brought. On the way up the hill towards the military base, the pain, caused by the plastic handcuffs, was so intense, that Israeli soldiers had to allow Azzeh to sit down on the ground, as he was unable to continue walking. 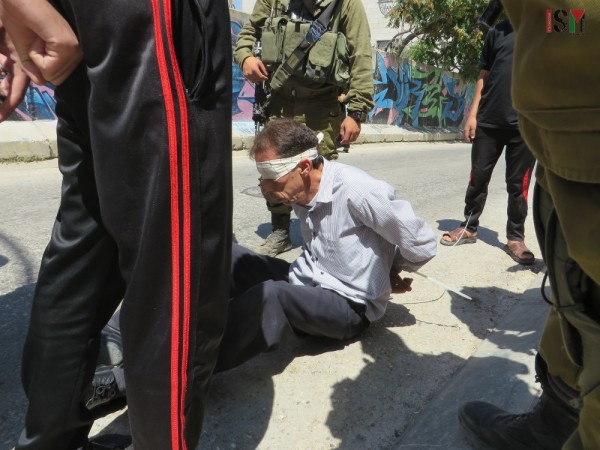 Palestinian man sitting on the ground in pain

Palestinians observing the arrest were continously telling soldiers about Azzeh’s recent operation on his hand and the plate that had to be inserted during this operation. Even though they were explaining the immense pain the plastic handcuffs were causing to Azzeh due to this operation, the Israeli soldiers shouted at them to leave the area and be quiet. Various requests to call an ambulance were denied. Only after Azzeh’s brother, who is a medical professional, arrived and reasoned with the soldiers, they attempted to cut the handcuffs. As the soldiers put the handcuffs too tight, they were struggling to cut the handcuffs without cutting Azzeh’s hands, making the procedure even longer and more painful, with Azzeh suffering immensely and crying out in pain. 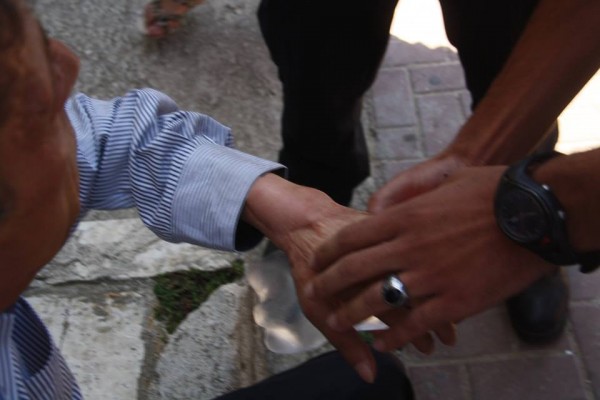 In the meantime, a civil police car was driving past on a regular patrol and got stopped by the Palestinians in an attempt to alleviate the situation for Hisham. After the handcuffs were finally cut off, by-standers cooled his hand first with a bottle of cold water until an ice-pack was brought for him. The police took Hisham Azzeh to the police station after a long discussion. After about an hour, Azzeh was released.  He is now doing okay, but is still suffering from pain in his hands. 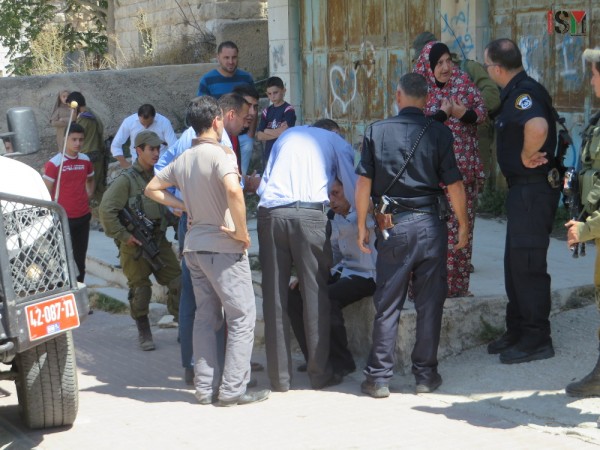 Police, bystanders and the soldiers standing around Hisham

Harassment like this in al-Khalil (Hebron) is not unusual. Palestinians have to pass through various checkpoints on their way home or to work and often get detained for long periods of time.