Interview to Dr.Rami Mokdad, head of the Oncology Department from Shifa Hospital in Gaza

No private hospital in Gaza treats cancer, only the public ones, and that the treatment is free of charge.

“At Shifa Oncology Department we treat everyday 150 patients, and we are in total 3 doctors, 5 nurses and have just 15 beds. Obviously  that’s not enough.“ 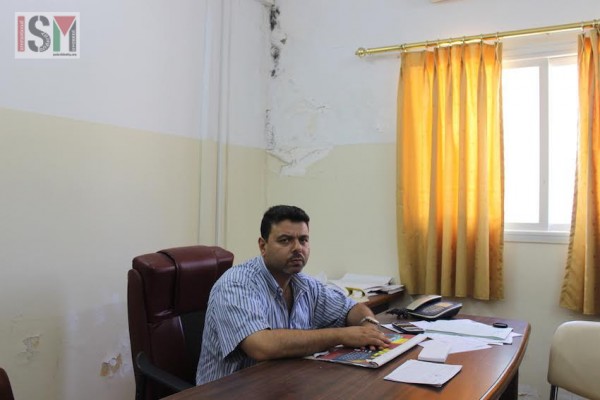 “In the last 10 years it has grown a lot the number of patients with cancer in the Gaza Strip. Especially in young people and children, before most of the cases affected old people, but since the Zionist aggressions against Gaza started it became normal to receive children and young people with cancer.

The three kinds of cancer that have grown more in those years are thyroid cancer, leukaemia and multiple myeloma cancer.

For example, in 2005 we had less than 50 cases of thyroid cancer, in 2014 we had 300 cases. Actually we are receiving each month between 70 and 100 new cases of cancer patients. In this oncology department, the most important in the Gaza Strip, we treated in 2010 around 2800 patients. On 2013 the number grew to 5000 and the last year, 2014, we treated around 6000 patients. And I’m afraid these numbers will continue to grow even more. In 10 years we’ll have a huge crisis in Gaza, as the risk factors are getting worst; the use of war weapons by Israel in highly populated areas, the consumptions of polluted water, the use of polluted land for growing food, etc.

Another special case we find in Gaza is the nasopharyngeal cancer, especially in children.  Those cases come from areas where the people had primary contact with the Zionist bombs, especially with white phosphorous, but also in cases where their home was bombed.

Due to the blockade we find a lot of difficulties for making the diagnosis and treating those patients.  For example in Gaza we don’t have either radiotherapy or molecular therapy, and we find a lot of obstacles to send the patients to the West Bank to receive the appropriate treatment. We also don’t have PET scan, isotope scan or laboratory markers. We also suffer from an important shortage of chemotherapy supplies and other drugs, we could say that we work with the 40% of the supplies we really need. As even when we receive some of these drugs, we don’t receive them continuously, so we never know if the next week we’ll be able to provide the needed treatment to the patients.

The Palestinian Authority is responsible for this shortage of drugs, as they don’t send the supplies intended for Gaza due to its will to punish Hamas.

This attitude from the Ramallah based government, along with the blockade imposed by Israel and Egypt that doesn’t allow the patients to leave the Strip in order to receive the treatment outside, and in the case of Egypt, that also doesn’t allow the entrance of medical supplies and drugs through Rafah Border; are responsible of our inability to treat properly the cancer patients from Gaza.

Unfortunately, due to the lack of resources of the local government we don’t have any serious studies addressing the cancer issue. And we don’t know why any of all the International Agencies or NGOs is studying that.”