This article was originally published as a press release by Operation Dove.

The entire Palestinian village of Susya is in danger of demolition and expulsion. By refusing to issue an interim order preventing preemptive demolitions before their case is heard, the Israeli High Court is allowing for the demolition of the entire Palestinian village of Susya and subsequent expulsion of its 340 residents. The refusal of the State to commit to not demolishing before the conclusion of proceedings suggests it has plans to destroy the village in the near future.

On one hand, the High Court of Justice is willing to hear the village’s petition to legitimize its status, but on the other hand, the court allows the village to be destroyed before even deciding on the case. 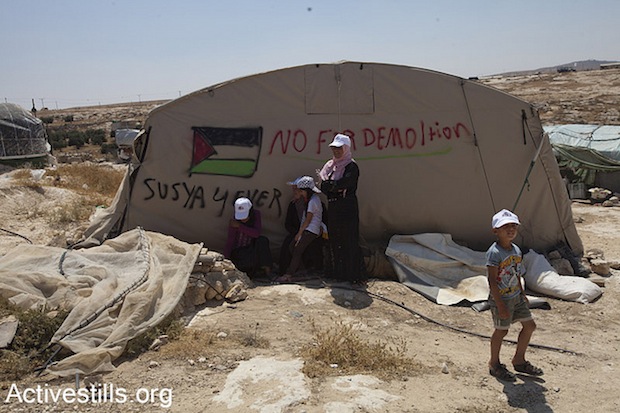 On May 5 2015, High Court Judge Noam Solberg rejected the request for an interim order by the Palestinian village of Susya, represented by Rabbis for Human Rights, in a petition against the Civil Administration’s decision to reject the master plan prepared by the village and subsequent demolition of the entire village.

The village argued that their plan was rejected for non-professional reasons and that the village should be legalized due to its unique history. The residents sought an interim order to freeze the implementation of the demolitions until the petition is heard, as is standard practice in these sort of cases.It was against this request for an interim order that Justice Solberg, without even conducting a hearing on the request, made the unusual move of granting the state’s request not to freeze the orders. This decision means that the Civil Administration can now destroy Susya at any time. The demolition of the village will lead to hundreds of residents living in the desert with no roof over their heads and may result in their displacement. The state’s refusal to commit to waiting for a conclusion to the court proceedings raises great alarm that it intends to implement the demolition order in the near future; tragically, it seems the villagers are in real danger.

In the petition, Susya’s residents claimed that the army is obliged to legalize their village as it was the one to confiscate their land and their caves in 1986, leaving them without a housing solution and forcing them to move to their adjacent agricultural lands. As evidence to the life in the village prior to the expropriation, various testimonials and photographs of life in caves were presented to the judge. Among other things, there were documented photos of a visit by the US Consulate to the village at the beginning of 1986. The photos and testimony clearly shows that the Palestinian village of Susya is an old village formed prior to the Israeli occupation and the declaration of the area as an archaeological site.

Among the evidence was the opinion of the late governmental legal adviser Plia Albeck (considered to be very pro-settlement and who wrote in her memoirs that she tried to find legal ways to declare Palestinian land as State land), indicating the existence of a Palestinian village in 1982 where today the archaeological site stands.

Despite the evidence presented before him, revealing the many injustices done to the villagers – from the expropriation and dispossession of their lands, to the refusal by the state to recognize the status of the village in its new location – Judge Sohlberg did not agree to hear the case before allowing the demolishment the village and setting the fate of its inhabitants.

Attached to the petition, inter alia, was an expert opinion by Prof. Eyal Benvenisti, a renowned expert in international law, stipulating that the demolition of the village of Susya constitutes a war crime.

This week, a report by radical right-wing NGO “Regavim” (which has close ties to the settlement enterprise) was exposed indicating that in the nearby Jewish settlement, also called Susia, there are 23 illegal homes built on private Palestinian land. We have no indication of any attempt by the state to demolish these illegal structures in the settlement Sussia or in its nearby outposts. We see in this current situation that this Jewish settlement, whose very existence is prohibited by international law, and where some of its homes are sitting on private Palestinian land, is prosperous, while the Palestinian village of Susya, whose inhabitants are on their own private land, is at risk of displacement and loss of their entire village.

In 1986 the village of Susya was declared an archaeological site, its land expropriated, and its inhabitants, who lived in caves, were deported. While the Palestinians were told that they could not reside in an archeological site, Israeli settlers live in an illegal outpost located inside the archeological site.

After the expulsion, villagers were forced to move to their neighboring agricultural plots. Because there was no willingness to grant a zoning plan, they involuntarily became illegal builders. Dozens of villagers followed procedures in attempts to obtain building permits, but those attempts were rejected. In 2012 the villagers raised funds and submitted a proposed master plan, drawn up by Professor Rassem Khamaiseh, for the Civil Administration for review. The plan would authorize construction in the village according to accepted standards of professional planning.

The plan was rejected in 2013 on very questionable grounds, indicating a double standard in planning, and blatant discrimination against the Palestinian population. For example, it was argued that the number of residents in the village, which is a few hundred people, is not substantial enough to grant it independent planning as its own entity. On the other hand, dozens of unauthorized outposts which are built housing only a handful of residents are approved by the Civil Administration’s planning body. In addition, it was argued that the plan will prevent the population from properly developing and moving out of poverty, and therefore, they should be moved to an adjacent city. It should be noted that the city is, of course, in Area A, and what actually prevents the progress of Susya is the lack of infrastructure which they are prevented from building. Also important to note is that Israelis are permitted to choose their preferred way of life – be it urban or rural, and are not forced by the state into one or the other.

In 2014, Rabbis for Human Rights petitioned the High Court on behalf of the Susya village council and its residents against the decision to reject the village master plan (HCJ 1420/14). As mentioned, on May 5th the court rejected the request for an interim injunction, leaving the whole village vulnerable to imminent demolition.

The danger of demolishing and expropriating the village of Susya reflects the systemic problem of planning for Palestinian villages located in Area C; in these villages, planning is done by military planning committees, without representation of Palestinians, with the intent of preventing residents from building on their own land based on reasonable and professional planning standards. A recent High Court petition, submitted by the village council Dirat, Rabbis for Human Rights, Jerusalem Legal Aid and Human Rights Society, the Israeli Committee Against House Demolitions, and St. Yves – Catholic Human Rights Center, demands planning authority be returned to Palestinian villages for their own communities in order to prevent the tragic demolitions of hundreds of homes every year due to the impossibility of obtaining building permits.