New
Home / Features / Home demolition in Jerusalem: “They want our land. We need help to protect it.”

Nureddin Amro and his brother Sharif Amro and their families were awakened at 5:30 am by over a hundred Israeli soldiers who came to demolish their home in the Wadi Al-Joz neighborhood of occupied East Jerusalem on Tuesday, March 31, 2015. Both men are blind. The brothers live with their ill 79-year-old mother, their spouses and children. Nureddin has three young children, Sharif has four; all are under 14. Israeli soldiers pointed their guns in through the windows of the house while the children were still asleep and cut the electricity and phone lines to the house.

“We were asleep. They banged on the doors and shouted. Soldiers completely surrounded the neighborhood. There were dogs and aircraft. It was frightening,” said Nureddin. “There was no advanced notice. No reason given. They announced that they came to demolish the house and they started doing it while we were still inside.” 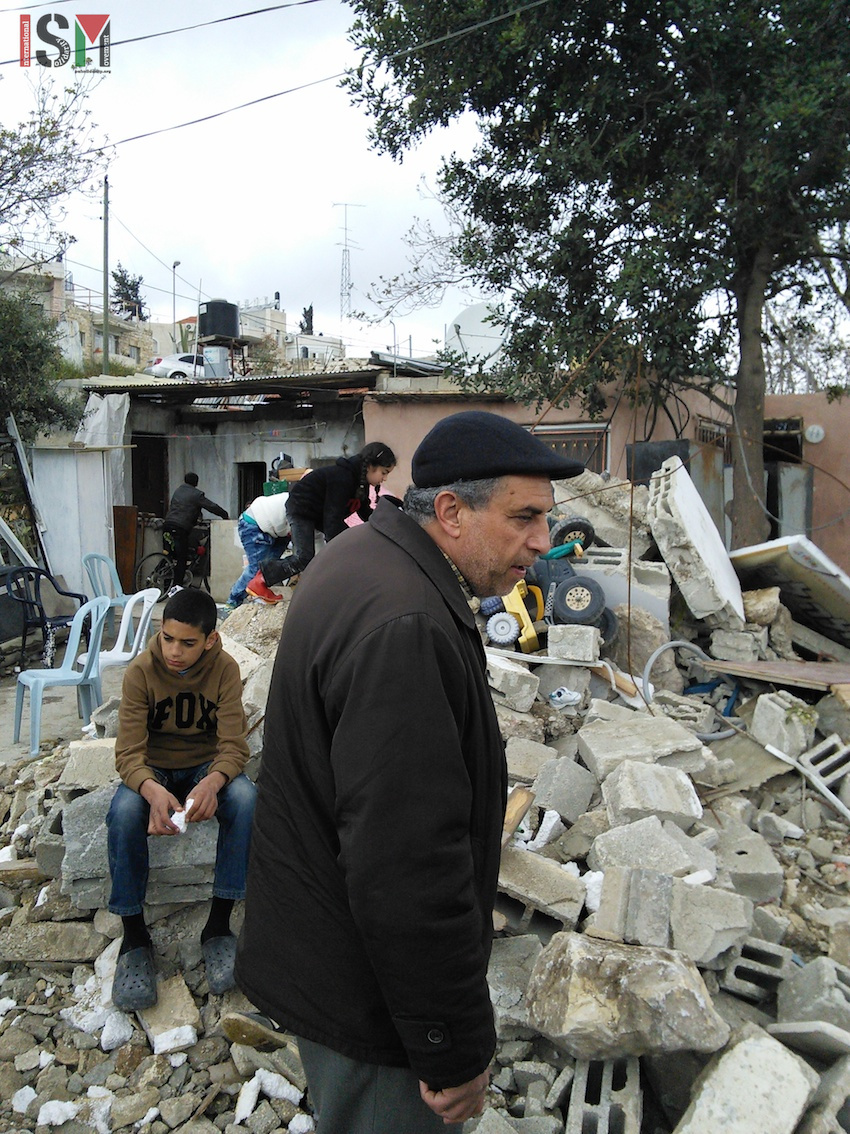 The Amro family stands in the rubble of their demolished home

Nureddin asked for time to go to court or the municipality for an explanation, but the soldiers refused. The soldiers assaulted the family, kicking Sharif and beating everyone, including the women and children. “They attacked us and locked us in one of the rooms. My son and brother were injured. They stayed for four hours and destroyed four rooms, the garden. They would not give us time to take anything from the rooms. All of our things, the children’s pets, their rabbits and chickens were killed under the rubble” Sharif was taken to the hospital after a soldier kicked the blind man hard in the ankle. Israeli forces refused to even let the family salvage their belongings before they tore it down. 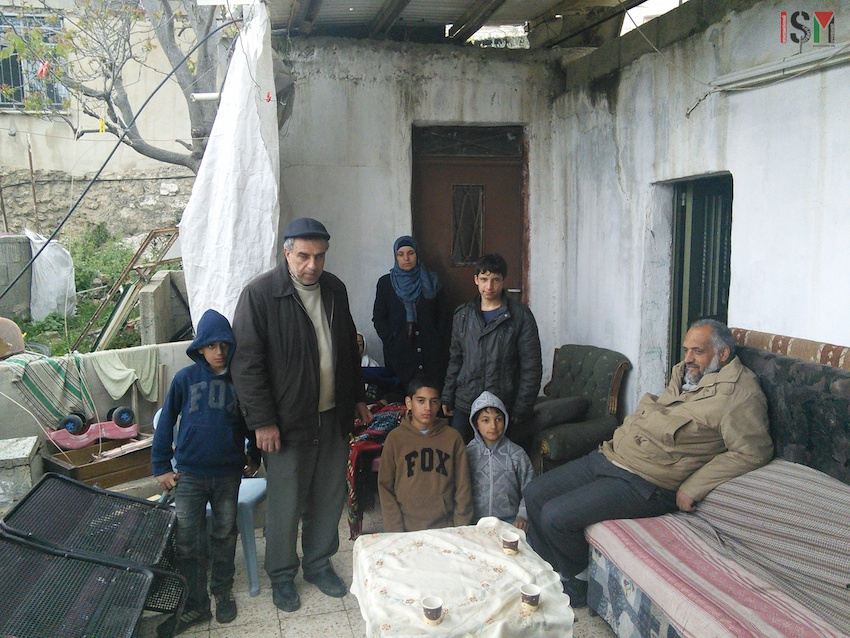 Nurredin is the founder and principal of the Siraj al-Quds School for visually impaired and sighted children in Jerusalem. He is a Synergos Institute Social Innovator and was recognized by the British Council for his leadership working for positive change and social development for people with special needs. According to Nureddin, there was no demolition order against the homes although there have been demolitions in the neighborhood before. They had received warnings a couple of months ago to clean up scrap wood, wires and materials that were around the house, and they did the cleaning as required.

While they were demolishing the rooms of the Amro family’s home Israeli forces destroyed a fence on the neighboring Totah family’s land, along with a shelter that housed a horse, chickens, and a dog. Soldiers also cut the family’s internet and broke the water line. The father of the Totah family was beaten, handcuffed, and arrested; he was later released. 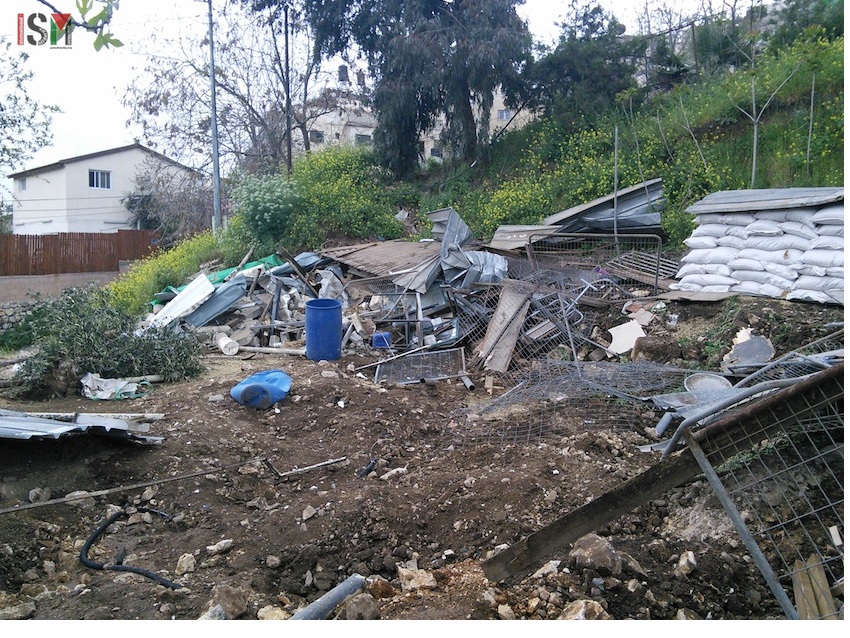 As of this writing, the part of the house that remains standing where Nureddin and his brother are staying with their families; still has no electricity, water, sewage or telephone services. Soldiers returned to the family’s home again this morning, moving the rubble that was visible from the street and threatening that they would be back. 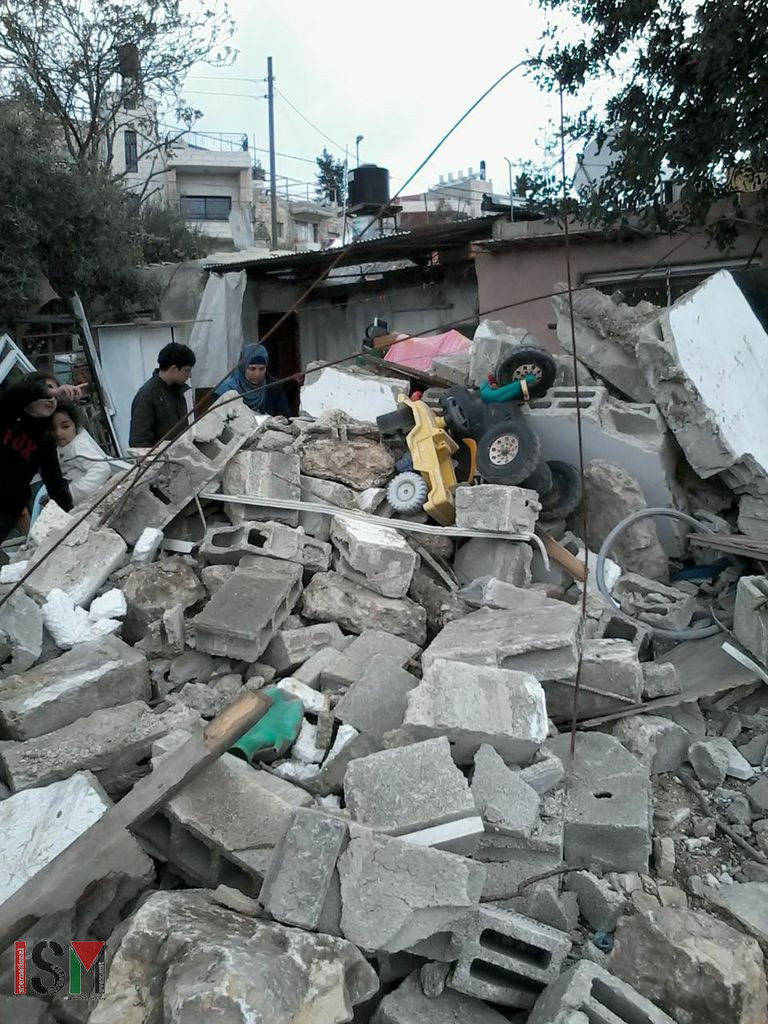 Israeli authorities have already annexed land across from the Wadi Al-Joz neighborhood, creating a national park which encompasses an illegal Israeli settlement. Local residents reported, speaking of the constant threat of settlement expansion under the Israeli occupation, that “they want to get rid of all the houses, all the neighborhood. They want to put their hands on this land from here to the Old City.”