Journal: Farming in Gaza near the Buffer Zone

The farmers are rarely talked about. They blend into the background of the lands beyond the destroyed buildings of the towns. The reality is though, they are facing a battle themselves. 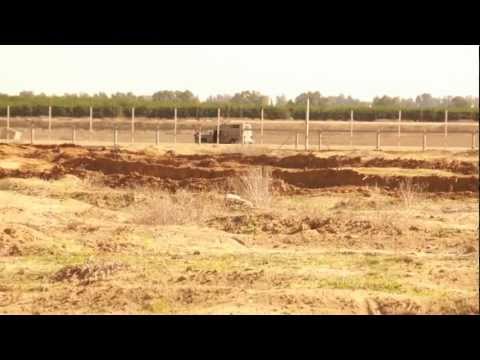 Many farmers have had their homes, and farmland attacked. Farm land attacked I repeat, I mean, who would ever have thought that land could be an enemy that needed to be struck by a missile?

Well, the attacks from the air have stopped, for now, although the buzz of the drones rarely hum a tune of silence, sometimes accompanied by the whooshing high speed winds that the F-16s bring with them.

The farmers situation is clear cut and simple; they have land and are in fear of tending to it. What is to fear when all you want to do is plough, and sow seeds, and nurture your land to provide food, shelter, and clothing to your family? How is it okay for a person to work in fear of being shot at, for doing nothing other than farm on their land?

The fence in the buffer zone is the cutoff point, so we should be able to go right up to it without fear of being shot at, or even worse, shelled, as the Israeli army rolls around in their tanks pretty much, round the clock.

Yesterday, the 8th of November, the farmers went to their land to start ploughing away at the soil to get it ready for sowing. They use a tractor. What happened when they went? The Israeli military shot in their direction. Luckily, nobody was hurt, but a tire was shot at and destroyed. These farmers struggle to even pay for contingencies such as these; work hazards caused by Israeli attacks, and why should they even have to? But they do.

So, they called several international activists here in Gaza, and said, “Please come with us to our land, we need to go there with the tractor and do our work but they keep shooting at us.”

Of course, we agreed to go and help, and even this morning, they rang two times, to make sure we were coming. They would not start their work without our presence.

This is their situation, they cannot work without fear of being shot at. It is as simple as this. Where in the world do you hear of such crimes against humanity occurring and resulting in no punishment to the aggressor?

It happens here in Gaza, in Palestine, all the time. The Israelis attack, and they continue to get away with it. The world’s silence is killing and destroying these people.

I met with a farmer, his name was Rami Salim Kudeih, he is 33 years of age, with a wife and five children. The youngest child being one month old, and the oldest, nine years of age.

I asked what he wanted to grow on this land and he said, ”wheat and lentils”.

”This is the season for it. The season may leave us and we will not have done any work because we are in constant fear of attacks from Israel. They have killed people here before on this land that is called Um Khamseen.”

”When the Israelis shoot, I feel angry and sad. A woman was killed in a nearby field too, within the last two years. My sister has also been injured whilst working on these fields, she suffered from a head injury but now she is better thanks to God, but sometimes in the cold, the pain comes in her head.”

The saddest thing of all, is that when I asked Rami, what he thought the international world could do; the world outside of the open air prison that is Gaza, his reply was indeed heartbreaking. It showed me that he had lost hope, that he is living with the situation as it is, with no sight for improvement.

‘They [the Israeli military], shoot often, they shoot in our direction, at the land, and alhamdulillah [praise to God] so far no deaths…but we never know what will happen.”

”The only solution is for the internationals to accompany us in the fields so we can do our work.”

I was expecting a response where he would ask the world to raise their voices and put pressure on the world leaders to put a stop to these crimes against humanity, but in fact, he gave a response which showed his resignation to the life that they are subjected to in Gaza. The life of living in constant fear of being attacked by Israel.

During our time this morning out on the field, we were between 100 – 150 metres away from the fence, things were quiet, though we did see two Israeli tanks rolling around close by, and then go into hiding.

The farmers managed to carry out their work in peace and then we left.

The point is though, they should not need to have any internationals present, they should be able to go safely to their land without any worries.