On November 20th, the Israeli forces seized a tractor, its truck, four water tanks and three tanks’ bases from the Palestinian village of Susiya. 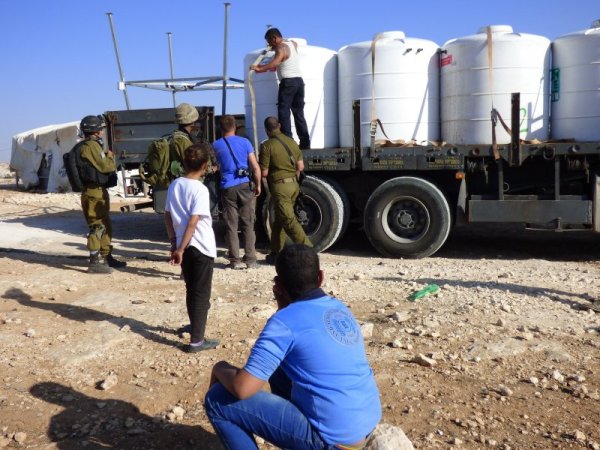 In the early morning DCO [District Coordination Office] officers approached the Palestinian village to take pictures of the ongoing works to install four new water tanks. In the early afternoon DCO officers returned with Israeli army, police, two trucks, one of which was equipped with a mechanical arm.

The tractor and its truck, that carried water cisterns and their bases, were seized with the accusation of being used for illegal works, since Palestinians didn’t have permissions to install new water tanks. Tanks and bases were seized without any previous issued demolition order under the pretext that they were not yet installed on the ground. 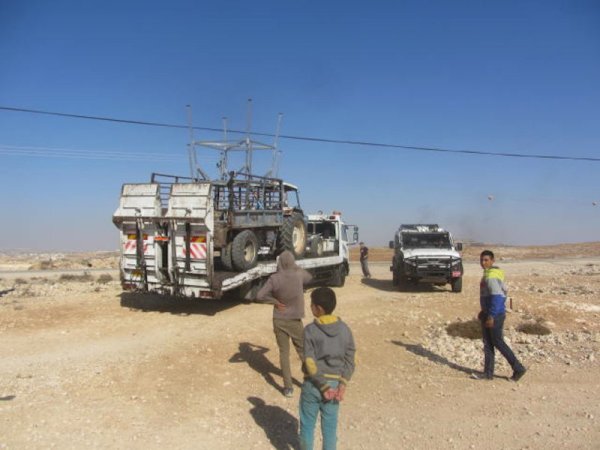 Water tanks were geared of filters to provide drinkable water and were donated to the Palestinian village because of the lack of drinkable water that effects all the South Hebron Hills area.

Palestinian residents of Susiya pay 35 NIS per cubic meter of tanked water, six times more than the nearby settlement, which is served by the network, and Palestinian residents spend up to 1/3 of their income on water. Water consumption of Palestinians in Susiya is 28 liters/capita/day, significantly less than the 70 l/c/d consumed by an average Palestinian and well below the World Health Organization standard of 100 l/c/d. (source OCHA OPT)

The Palestinian inhabitants of Susiya are struggling through non-violent popular resistance in order to gain the right to access their own lands and to live a dignified life.

Operation Dove has maintained an international presence in At Tuwani and the South Hebron Hills since 2004.