On Monday November 17th, the Israeli occupation army invaded the village of Hajja, in the Qalqilya district and issued five home demolition orders. The village of Hajja includes land that is officially considered Area C, as well as Area B, but the village is treated entirely as if it is part of Area C. Area C makes up 60% of the entire occupied West Bank, and is under full Israeli military and civilian control. Palestinians living here face many restrictions, including building limitations.

Hajja is located near the main road to Tulkaram, a road frequently traveled on by Israeli forces. Villagers say that they see occupation soldiers nearly every day.

The five home demolition orders were distributed as the families did not have “official permission” to build or renovate their existing houses. In Area C, Palestinians are required to obtain permission from the Israeli military before doing any construction; however, such permits are nearly impossible to get in reality. Due to this, many Palestinians who need more space or a new home simply build without permission and take the risk of future home demolition.

According to one of the family’s who received a stop work order on the new house they are building for their family of nine, the Israeli occupation forces enter the village with Israeli civilian authorities approximately every 18 months. Each time they come, they check to make sure no one is building without permission; when they find people who are not following the impossible permit system (and they nearly always do), they issue stop work orders or home demolition orders. Although the family that received the stop work order is building a new home and thus will not face homelessness if it is destroyed, the other four homes facing demolition will cause the families there to become homeless.

People will continue building, even knowing that they face possible demolition, because it is necessary to meet the needs of their expanding families. Permits are almost impossible, so what other option do they have? In the meantime, the families await the destruction of their homes. 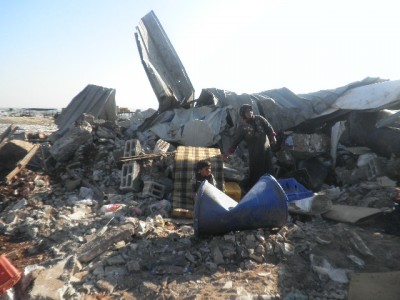 House demolition in Qalqilya in 2011 (photo by ISM).