The Democracy and Workers’ Rights Center field teams have documented full or partial damages to 75 kindergartens and day-care centers caused during the 51 day Israeli offensive against the Gaza Strip this summer.

DWRC’s field workers conducted field visits to all the kindergartens that suffered damages and collected information through filling questionnaires and affidavits from kindergarten owners in the five Gaza governorates, with a particular focus on eastern areas, where these damages were concentrated. 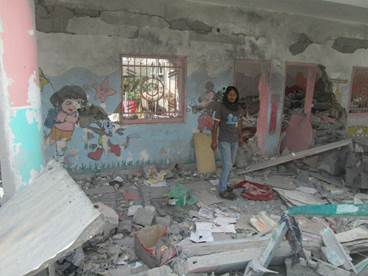 Photo by Democracy and Workers’ Rights Center in Palestine 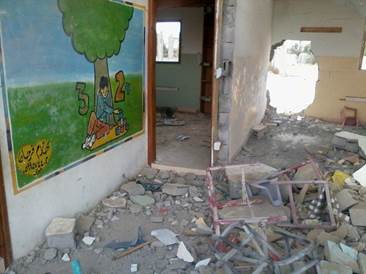 Photo by Democracy and Workers’ Rights Center in Palestine

The owners of some of the kindergartens have undertaken repairs at their own cost in order to reopen them and others have relocated to alternative premises near their original location, while a third group has been unable to open their kindergartens or day-care centers to this day.

The Democracy and Workers’ Rights Center strongly condemns Israeli attacks on educational institutions and  calls upon the international community to hold the Israeli occupying power accountable for crimes committed during its latest military offensive against the Gaza Strip. The Center stresses the need ensure special care and protection for children under all circumstances as stipulated in international human rights law and humanitarian law, and declarations on the rights of the child. DWRC also emphasizes the urgent need to rehabilitate damaged kindergartens and day-care centers, and compensate their owners as soon as possible due to the society’s need for their essential services.

Early childhood education in the occupied Palestinian territory is provided by private sector or NGOs, and receives no subsidies from the government. 99% of the workers in the sector are women, most of them paid well below the monthly minimum wage of 1450 NIS. It is a sector that has already suffered greatly from high poverty and unemployment rates, particularly in the Gaza Strip, since it largely depends on the capacity of families to pay for its services.

For further information or to access detailed data about the damages incurred by kindergartens and day-care centers, please contact us at extr@dwrc.org