We arrived around one o’clock in the afternoon of September 1st to the Far’a Refugee Camp and found that we had awakened the three Mansour family households.

“We didn’t have much sleep last night,” explained one sister. “The army kept us awake all night and made a horrible mess in my brothers’ flats.” On the floor below, her brother Khaled and his wife Hanan took us around the flat. They pointed out where seven soldiers, who barged into their home at 2:00 a.m. with their dogs, had intruded and what they’d done.

Soldiers went from room to room, ordering all the family members out of their beds, and departed almost two hours later, leaving the contents of all the cupboards and wardrobes strewn out on the floor. Soldiers became suspicious when they saw photo on the wall of Khaled Mansour speaking to a crowd of protesting Palestinians. The resident Khaled said that the soldiers asked him if he was politically active and what party he belonged to.

Every bit of each room was searched by soldiers and sniffed by dogs. A collection of silk Palestinians scarves Khaled was given by different organisations attracted particular attention, to the extent that one ended up in a pocket of a soldier when they who thought nobody was watching. 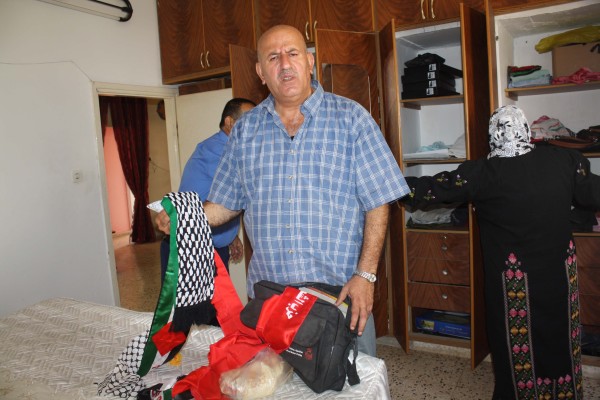 Nothing in Khaled Mansour’s flat escaped the soldiers’ attention, including these scarfs (photo by ISM).

Around 4:00 a.m. they moved to the flat of Khalid’s brother Asim and more soldiers joined. There were about ten of them with the dogs, crashing through his flat without any regard or respect for the family’s possessions. Many more soldiers were outside in the surrounding streets shooting rubber-coated steel bullets that woke up residents, who were unhappy about the military invasion of their camp.

Asim was interrogated in his flat by a Mossad man who wanted to know where his son was. Asim, a middle-aged man who has been in Israeli jails 11 times, the first time for 40 days at the tender age of 14, explained that he did not fear the Mossad and the Israeli soldiers and that his son lives his owns life.

Asim was first interrogated in his own flat, which soldiers turned into an interrogation centre by ordering the rest of the family into one room and rearranging the furniture to suit their needs. We asked what would happen if somebody refused to open the door to the army, and Khaled and Asif smiled. “They would blast it open,” Asif said. “Two weeks ago the army was at the door of a camp resident and used the explosives before he could open it.”

After 15 minutes of questioning, Asim was hand-cuffed and taken down narrow camp lanes, in the dead of the night. The army used his body as a shield, placing him at the front of the group of soldiers and exposing him to the stones thrown in protest from the surrounding houses.

Using people as human shields is an illegal practise under Israeli law and a war crime under international law. Yet the Israeli Army has been reported committing this crime in the occupied Palestinian Territories day in and day out.

About 10 more camp residents were treated in the same way. Asim saw one of them being made a shield by another group of soldiers and heard about the others, who were all detained to be interrogated about their sons or brothers, later.

All of the detainees were all taken one by one to a private house at the edge of the camp, which the army took over and emptied of its residents to turn into a military interrogation centre for the night, and all were later released. This happens often: the Israeli army just choose a house, wake up all the residents, push them outside and then start rearranging the house, in order to have the space they need to interrogate people.

We asked if anybody was injured in the raid and the brothers smiled again. Asim said, “We are so used to rubber bullet injuries, we don’t even count them.”

Khaled added that many were injured for sure, as “,soldiers fired rubber bullets form very close range and I have seen a youth with large swelling on his stomach caused by a rubber bullet.”

We asked Asim why he was arrested so many times and he answered: “Because I am a Palestinian and I refuse to accept the occupation. I won’t sit and let the occupiers do what they want.”

“Popular resistance is my life’s work,” added Khaled. “In the First Intifada everybody threw stones; we did not use guns. Because of its response, the real face of Israel was made public.” He related that people want the Intifada to return but now choose boycott and international solidarity. The BDS movement has had major successes around the world and is gaining pace in Palestine too; he said that “though there is sometimes no choice, it is now a shame here to buy Israeli goods.”

“We were the first to take on the BDS campaign,” said Khaled, who is a senior person in the Palestine Peoples Party and the PLO. “We go around shops and talk to both the shopkeepers and the shoppers about the fact that by buying Israeli produce we fund our own occupation.”

Far’a residents are denied homes and right of return

Far’a is a home to 6,500 Palestinians and Bedouins, who were made refugees in 1948. They came from 160 villages all over the area which is Israel today, but the majority of them come from the villages around Haifa.

The Mansour family’s village is Im Azinat, in the Carmel area near Haifa. The name means ‘mother of beauty’ and last time Khalid and his wife visited it was in 2000.

In Far’a the UNRWA runs schools, health and other services and through the Popular Committee residents can get involved in the camp and national politics. One of the main areas of Popular Committee’s work is the right of return.

The camp was created in 1948 on 250 dunnums of land and that has not changed to this day. Rather, the camp grew upwards with people adding a floor on the top of their existing houses to accommodate families of their married children, but this expansion has reached its limits and new families have to buy land outside the camp to ensure that there is somewhere to live.

Buying land is extremely expensive and impossible for the 25 percent of the camp who are unemployed, mainly young and highly educated people.

Also, the surrounding land is mix of area C, which is fully under Israeli control such that Palestinians are banned form building there even if they own the land, and area B, where it is possible to get a house building permit for those who can afford it.

One of the main problems for Far’a residents is frequent army raids, which happen almost every week and which always turn into clashes. Residents and mainly youth react to the military incursion by throwing stones, and so becoming a target for arrests by the occupying army.

“Because we will not accept to live under the occupation, our life is not different from the life of our fathers, and now our children live the same life too,” said Khaled. “Our father, who has passed away, spent time in the British jail in 1947, then in the Jordanian jail in 50’s when they had control here, and then in the Israeli jails sons in the 80’s, and that is the life of our sons too.”