We sailed out from Gaza City’s harbor just before dusk with the 13-man crew, including two boys, and we had a theoretical possibility to reach six nautical miles for fishing. But that the limit determined by the occupying power would have been moved from three to six miles is mostly a play with words.

After the previous war that ended two years ago, the limit was moved to six nautical miles, which was again reduced to three, only two days before Israel launched its operation ‘Defensive Edge’ no fishing was allowed at all.

For those who are engage in kiddle, hook fishing, it has been a definite improvement, and it is likely that even trawl fishermen will be able to get better catches, so the question was how it will turn out for the once fishing with purse-seine, who primarily are fishing after sardines.

We are more or less cruising out from the coast, following the sonar display closely. It shows nothing but the structure of the bottom, the screen is black, no sign of fish.

The crew are every now and then checking for the red light from the Israeli patrol boats, wise from experience that they attack whenever and wherever they want, not bound to the limits or agreements.

Rade Bakr, the skipper, has been arrested four times in the past and his boat has been seized. Over time he has managed to recover his boat, but he does not want to be arrested a fifth time, not just for his own sake; approximately 80 people depend on the boat’s income.

Eventually, some small, pale spots appear on the sonar screen. We are between four and four an a half miles from the coast, and the captain decides that we should anchor. It is still too early to venture further out, it’s less risky to gain the waters back bit by bit then demanding rights from somebody behind machineguns. None of the crew are protesting, no one feels compelled to be the first with this type of boat to risk everything.

As the anchor is resting on the ground barely twenty meters below us, the machine shuts down and the big generator on deck starta, the headlights around the boat lit up to attract the fish, turning the sea around us a shimmering blue. Some of the crew take the opportunity to fish with a hook during the hours we are there, catching small red-backed fish, one of the two young boys comes with freshly made coffee, ever smiling and ever ready to do whatever the others want. 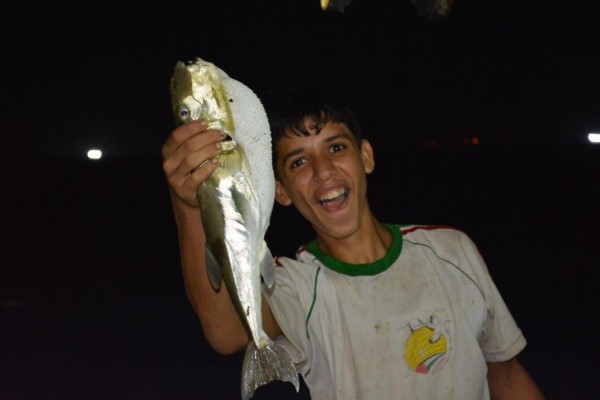 Food is laid out on the deck, and we sit in a large circle, each one leans forward to the bowls in its midst. Occasionally the crew are watching over the reeling, scouted by the bright light, and out to the dense darkness. It is difficult, almost impossible, to catch sight of anything under such conditions. It’s more like a reflex. I do not ask what they are looking for.

It’s time to throw out the purse-seine. The eco sonar shows more spots now and they are all bright. No orders have to be given, everyone knows what to do.

The skipper takes his place in one of the accompanying boats, a small hasaka (small fishing boat), and turns on its headlights to hold the fish while the now darkened boat lay the purse-seine in a big circle around the hasaka. So starts the heavy work of hauling in the net, with most of the crew  standing barefoot on the deck. 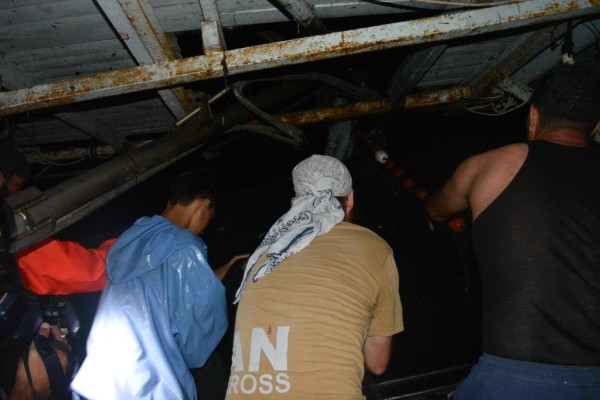 Suddenly the catch is laying on the deck, plastic boxes are picked up and sorted by types and sizes; predominantly small octopus but also small crabs, some odd varieties, and very little anchovy, which is supposedly the main catch. And the catch is not large, perhaps 60 kilograms in total. 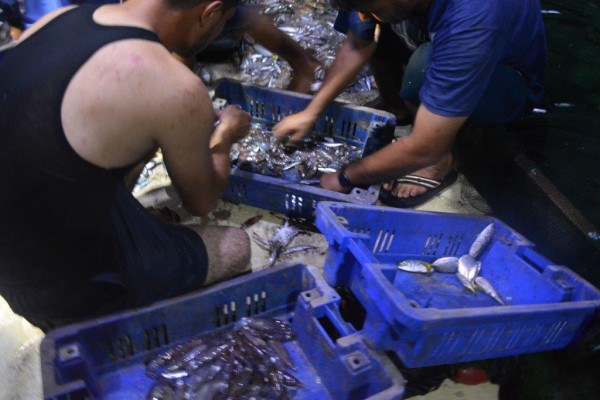 We anchored with headlights and some of the crew let down their hooks again, the ever smiling boy comes with a new coffee. The hours elapse, most are trying to get some sleep. So it’s time again, but this time it will be more dramatic. One of the crew has caught sight of the red light and is pointing it out to us. The Israeli patrol boat may well be outside the six-mile zone, but its presence is sufficient enough to spread alarm on board; it would only take patrol boat a few minutes to get where we are.

I feel that the crew are trying to haul their gear even faster than before, and I see that they all have complete awareness of where the red light is located. We cannot leave until the gear is on the deck, minutes pass, everyone is trying to assess whether the red light approaching or not, but in the end the catch is hauled in. It was leaner than the last time, the proceeds will not cover the costs. This would have required four or five loads. And to get plenty of fish, they need to be 9-10 miles out from the shore, still Palestinian waters, although they’re excluded from it.

This time, it was enough that the soldiers aboard the patrol boat lit a spotlight towards the fishermen so they would leave their own water, often the Israeli patrol boats do much more.