We arrived in Madama yesterday, 8th September; in the early afternoon after we were told that during the night Israeli army invaded this village, and the nearby villages of Burin and Asira Al Qibliya.

Our contact told us that the main road leading to Nablus was blocked during the night and that a car coming from Asira was prevented from reaching the hospital. Furthermore, a checkpoint was erected at the main entrance of the village; cars and pedestrians were searched until it was removed around 11am.

When we reached Madama, we saw a group of seven soldiers standing on the road beside the Mosque, blocking it with two military jeeps and one personnel carrier. More soldiers were inside the vehicles while those outside positioned themselves facing in different directions and keeping an eye on the surrounding streets, shops and houses.

The school had just finished and groups of children were filling the street and hanging around looking at the unwanted ‘guests’.

We decided to stay and see what was going on and take some pictures. We did this for about 10 minutes, before we attracted soldiers’ attention. Several of them came towards us asking what we were doing in the village, demanding that we hand over our camera.  We argued that we had a right to take pictures and that they did not have a right to take our camera, but they insisted that we could not take pictures of individual soldiers and in particular, the close-ups of their faces. 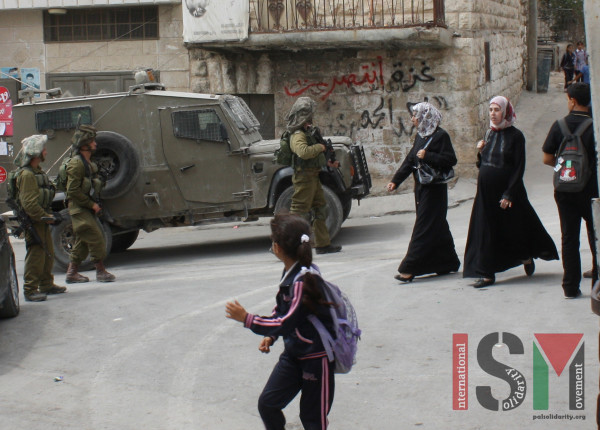 We used this opportunity to pose a question, “If what you are doing is right, why do you hide your faces?”

They refused to answer and instead, they gave us an ultimatum that we delete the pictures or they would take us to the police station to be arrested. They also promised us trouble by the immigration authorities when leaving the country. Eventually we decided to delete some of our photos.

Later we met a group of villagers and spoke about the situation in Madama.

“Every night we have problems with the Israeli army and every family here has been at the receiving end. Only during the attack on Gaza they left us alone, probably because they had less soldiers available here,” one of them said.

He continued to state that the army regularly enters houses in the middle of the night to search them. They do it after throwing the residents out and making them wait for hours, before they can return. In one such raid the soldiers stole 180,000 shekels from a house, claiming they did it because the money was going to Hamas. In fact that was the lifesavings of the man who worked for 20 years and received a payout after finishing his job.

The soldiers usually block Madama by closing the entrance at the main road connecting it to Burin and Asira Al Qibliya, and also closing the settler road located up the hill at the top of the village, connecting illegal settlements of Qedumim and Ytzhar with the main road leading to Nablus and the South.

“When you try to pass through, the soldiers often shout at you, ‘Go away!’ But who should go away? This is my village, my land!’” Said another Madama resident.

When we asked for the reasons why soldiers target the village, he replied, “They usually say that someone had thrown stones at them previously and I don’t really know if that is true. This morning after removing the checkpoint around 11 o’clock, they came inside the village and started taking pictures of the old houses. This makes no sense to us, we have no idea why they are doing this, and we are very worried.”

Israeli soldiers come very often to the village when the school finishes to provoke the children. “Soon this is going to be even a bigger problem. In November maintenance work starts in the boys’ school, and for about three months, boys will attend the girls’ school between 2pm and 7pm, which is very near the settlers’ road. The army is always present, we are really worried for our boys…”