Shepherds detained for crossing a road

While shepherding approximately 1 km south of Qawawis, a village south of al-Khalil (Hebron), on Sunday 24th near the illegal settlement and army base of Suseya, three shepherds were stopped by the Israeli army and detained for 20 minutes.

The three shepherds were just on their way back from grazing their sheep in the fields outside of the village when the Israeli army arrived in a jeep, stopping the shepherds who were attempting to cross the street. After shortly talking to one of the shepherds, the soldiers drove the sheep down the hill without any explanation.

As the sheep began to run away, one of the shepherds asked to look for them, but was refused by one of the soldiers. The soldiers accused them of passing over into land prohibited for Palestinians. It is an open area with no sign marking any borders. 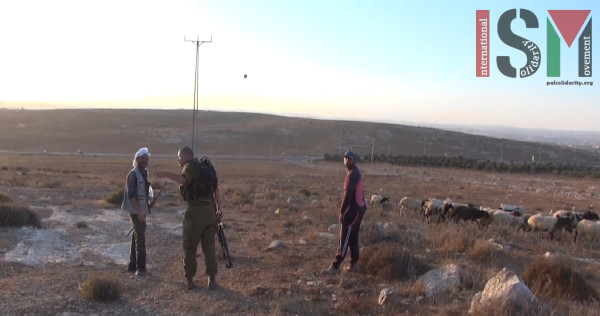 After being detained for roughly 20 minutes and their documents checked, the soldiers threatened to arrest them the next time they are seen “trespassing”.

Afterwards the shepherds were allowed to collect their sheep and continue their way home.

Qawawis is located in a “Firing Zone”, surrounded by a growing number of expanding illegal settlements and illegal outposts. For most of the families living there, the income depends on shepherding. The shepherds report that they are regular harassed and attacked by both the Israeli army and settlers from nearby illegal settlements.