The Ministry of Health Gaza announces the closure of Al Najar Hospital in Rafah, due to Israeli shelling in the vicinity compromising its ability to guarantee the safety of patients and staff.

The hospital has now been evacuated, bringing to four the number of government hospitals closed by Israeli attacks in the past three and a half weeks.

El-Wafa Rehabilitation Hospital, the only specialist rehabilitation hospital in Palestine, was forced to evacuate on July 17th, and completely destroyed on July 23rd.

Al Durrah Paediatric Hospital was forced to evacuate on July 24 because of damage caused by an Israeli strike next to it, and closed.

Beit Hanoun Hospital was evacuated on July 26 after several hours of direct and indirect shelling overnight, and closed.

Israeli attacks on hospitals are a gross breach of the Fourth Geneva Convention, as are attacks on civilians.

At least 65 people have been killed in the Rafah attacks, more than 350 wounded, and the attacks are still ongoing.

The Ministry of Health Gaza calls on the United Nations, the international community and people of good conscience everywhere to take concrete action to bring an immediate end to the ongoing Israeli attacks on medical facilities and personnel, and massacres of Gaza civilians. 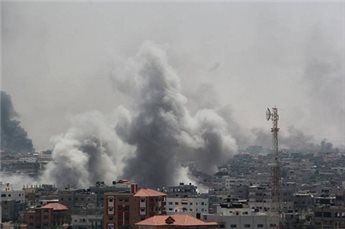 Shells fall on Rafah on Friday (photo from Ma’an Images).