New
Home / Nablus / Even the sky belongs to us

Even the sky belongs to us

On the 25th August, the village of Burin, in the south of Nablus, was closed by the Israeli army and declared a military zone.

A checkpoint was erected at the main access to the village, preventing the inhabitants from entering and exiting the village.

The blockade was imposed after clashes broke out the previous night when the military invaded the village, raided houses, and detained several villagers for interrogation.

A villager spoke to the International Solidarity Movement (ISM) about the closure of Burin, “They always have the same excuse, someone threw stones at the settlers, or sometimes they say molotov cocktails, but that is only an excuse. When we do react, it’s only resistance, only to defend our families and ourselves. We are used to these situations in Burin, problems with the settlers or clashes with the army occur daily and the main road is blocked almost every week. It would be strange for us if this didn`t happen, as strange as if they failed to shoot tear gas and sound bombs during the demonstrations. It’s in our blood already.

When they block the road, going to Nablus for work or to school requires one hour more than usual, causing problems to students and workers.

This morning one of my neighbors had to stand for four hours at the temporary checkpoint without any reason, before getting the permission to enter his village. He just wanted to return back to his home but, when the soldiers saw in his ID that he was from Burin, they detained him.”

Settlers often invade the Palestinian lands around it, burning olive and almonds trees or poisoning them with chemicals.

They enter the village regularly, trying to break windows by throwing stones or to burn homes, always acting under the army protection.

The villager continued to speak to ISM about the situation, “In the last year alone, Burin lost 1600 olive trees and between 500 and 600 almond trees, but every year we collect money from the people in the village in order to plant 2000 new trees and to support our farmers.

As we don’t have access to large sections of our olive fields, except for couple of hours over a couple of days during the olive harvest and with an Israeli permit, I think that, sometimes, going for a coffee on our land can be even more significant act of resistance than a demonstration.

As Israel always tries to steal Palestinian land, with the excuse that it doesn’t belong to anybody, or is not being used, it’s meaningful just to go there to show that there is someone taking care and making use of the land.”

Once a year, hundreds of kites fly over the houses in Burin, with children and families making a stand together.

“This is just another way to say to them that even the sky over our land belongs to us.” 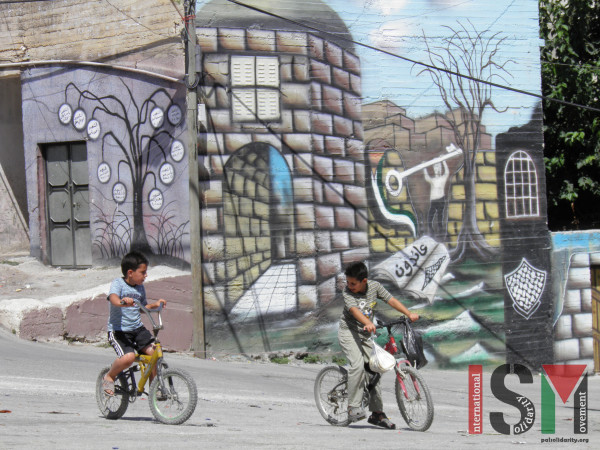