Thanks to every one who responded to our urgent action alert, the Egyptian authorities opened the gate to allow the trapped group of foreign passport holders in!

Lets keep the pressure up on the Egyptian government until it opens the Rafah crossing to everyone and ends it’s complicity with Israel’s genocide.

See the Action alert issued by civil society organizations and public figures to demand the opening of the Rafah crossing here.

This morning a group of over 70 people, mostly women and children carrying foreign passports, planned to take advantage of the ceasefire to leave Gaza and enter Egypt. Israel began bombing Rafah and the Egyptian personnel closed the Egyptian side of the border, leaving them trapped at the crossing, as the bombs fall around them. The Red Cross is not being allowed to reach them due to the bombing in the area.

Their nationalities include German, Norwegian, Bulgarian, and Egyptian.

Call the Egyptian Embassy in your country.

Call the German, Norwegian, Bulgarian foreign office and political representatives to demand that the Egyptian government opens the crossing and allows civilians to take refuge.

“The situation is very scary, the borders are closed and we are here, 70 people, mostly women and children trapped. I can see the smoke and fire, and I can hear the explosions very close to where we are,” said Nalan, one of the women trapped at the Rafah Crossing, talking to The Real News.

Listen to the audio recording of a phone call with Nalan Al Sarraj, correspondent for The Real News Network, trapped at the crossing here.

A call issued by civil society organizations and public figures including African National Congress (ANC) leaders Ahmed Kathrada, Ronnie Kasrils, and former vice president of the European Parliament, Luisa Morgantini and Richard Falk states that “Despite a call from Egyptian citizens to lift the siege, the Egyptian government which controls one border and has the option to be part of a humanitarian response to the besieged people of Gaza, has instead supported the Israeli plan for return to the status quo of slow genocide.” 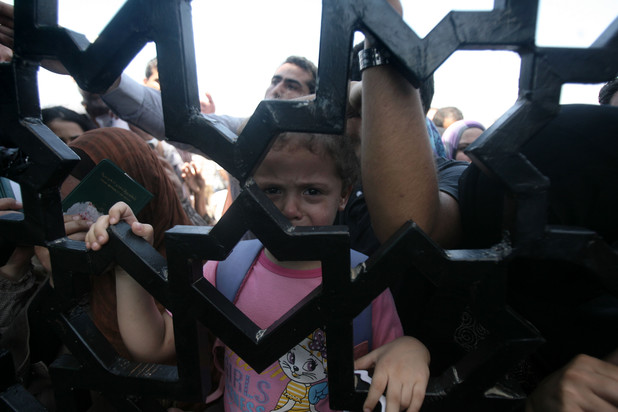