New
Home / Gaza / Where will they go?

Where will they go?

The attack has been going on for over two weeks. I was awakened early this morning by explosions that were so close that they shook the house. Then came a phone call, telling me that there was an apartment building nearby, where a woman from New Zealand had been targeted.

I got hold of her, she wasn’t injured, but a little stressed. She was contemplating whether she should try to find other accommodation, or stay. I understood her hesitation. To find other accommodation, now that 150,000 people have been forced to leave their homes, a figure that is constantly rising, is not the easiest. Nor is it much safer elsewhere. When hospital after hospital is bombed, you realize that there are no safe places here.

As I arrived, a group of journalists in helmets and bulletproof vests had gathered, waiting for the next attack on the same house. It was burning on the top floor, but it had not been completely destroyed. It wasn’t hit by the more powerful missiles from F-16, more likely from drones. The fire brigade was there, but in fear of more attacks they didn’t go inside the building.

Two missiles through the air, explosions, and a cloud of smoke rising. Journalists rushed forward to get better pictures. People who were evacuated from nearby buildings, very few with belongings, most of them without anything but small children in their arms. Many of them did not even have shoes on their feet. And there was the same contemplation as my friend from New Zealand: Where will they go?

I had a meeting and went to Awda hospital in northern Jabalya, a refugee camp north of Gaza City. On the way I passed several blown up houses with glass and building materials scattered in the streets, and in front of us was a thick black pillar of smoke from what I found out was a factory that produces plastic shoes. Around me explosions were constantly heard from artillery. And the buzzing of the drones, of course. 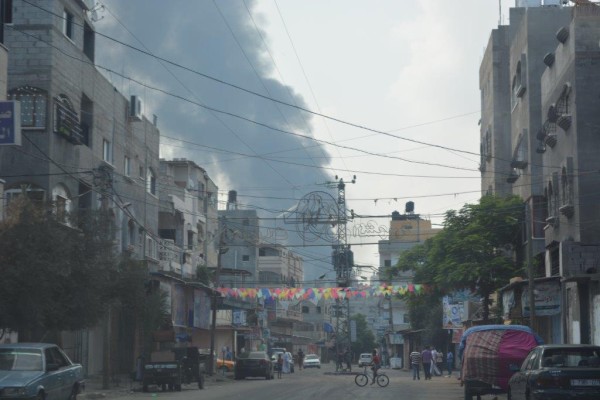 Dr. Yousef Sweeti, the hospital director, received me. Since the hospital in Beit Hanoun had been attacked, Awda is the northern most civilian hospital. They specialise in maternity care, and ear nose and throat treatment for children and the elderly. They are not primarily a hospital for emergency cases, however presently this is the majority of their patients. 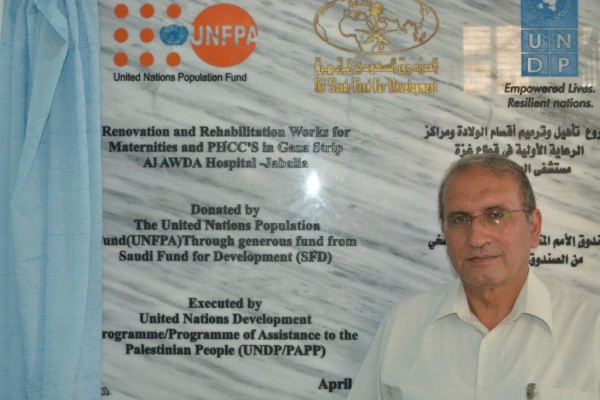 Unlike several other hospitals that have been subjected to the Israeli military bombardments and threats, Awda hospital has been left alone. A discussion has been held with the largest hospital in Gaza, Shifa, on the possibility of transferring patients to Awda, something that can become urgent after the threats made on Shifa by the Israeli army. But Dr. Sweeti has had to say ‘no’. Not only for the large amounts of patients they have, which they share with all hospitals, but perhaps primarily for its geographical location; when the Israeli ground troops last entered, they were less than a kilometer away. This hospital is not a safe place.

Awda hospital is also in shortage of drugs and medical equipment, even if they are better equipped than elsewhere. For most items, they have storage for at least a month; enough if the bombardments continue for a short period of time. However oxygen supply is running critically low, and the hospital only has enough left for one day and a half. When I was shown into the office, Dr. Sweeti’s colleague was on the phone with the Red Cross trying to get them to bring in more.

Compared to the onslaught in 2012 that lasted for eight days, the situation is worse now, mainly as a result of the blockade. The supply of medicine and equipment was small to begin with, and diesel for the generators is much more expensive due to the collapsed tunnels to Egypt. A very large portion of the hospital budget goes to cover that cost.

The number of patients is far greater, this time, but most disturbingly, the injuries are different. When I had told Dr. Sweeti about the charred bodies I’ve seen after a drone attack on a taxi, he nodded in agreement

“The Israeli missiles develop a great heat, burning the bodies to ashes. I believe that Israel are testing new weapons on the Palestinian population.” He also noticed that far more bodies have been fragmented in these attacks.

We went down to one of the hospital wards and visited patients. 15-year-old Noor Al Mabhooh was admitted last night with shrapnel wounds to the feet and in one shoulder, after the Al Mabhooh family home was hit with an airstrike. Four other family members were also injured in the attack and were taken to other hospitals, an attack which was not preceded by any warning.

I thanked Dr. Sweeti for his time, and took a taxi back to my apartment. I used the opportunity to look at the destroyed houses we passed on one side of the road. Those on the other side, I had already seen.