We began walking in a crowd, full of men, women, and children. I couldn’t began to estimate how many people were gathered, at least 10,000. 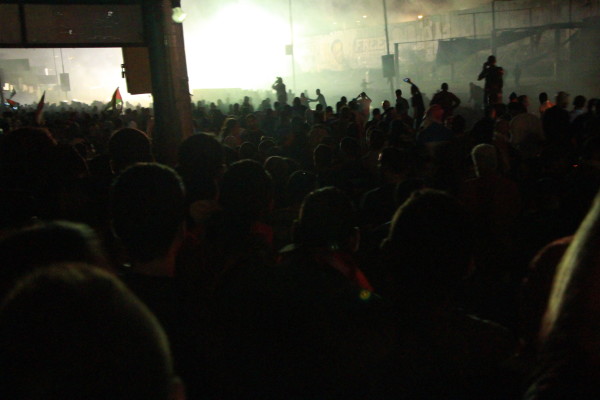 The mood was cheerful, people were singing, clapping, holding banners, and waving many Palestinian flags. Cars were driving alongside us and playing loud music. People were standing on roofs; it felt joyful.

As the crowds become larger, though I was still far from Qalandia checkpoint, I could see ambulances driving away, seemingly already full of injured people. As I got closer the mood seemed to change. Youths started running through the crowds and I could hear fireworks in the distance; though as time went on I could know longer distinguish between fireworks and military weapons.

The ambulances were struggling to drive through the crowds; it felt like every few seconds another protester was injured. It was difficult to see, there was smoke in the air and you only knew you of an injury when someone fell to the ground, or the crowd parted for youths carrying their friends away.

As I slowly moved forward, the first sound of a bullet passing by struck a shop door to the side of me. The sound of rubber-coated steel bullets and live ammunition is very distinctive, it is hard to confuse the two and both were being fired, seemingly at random, into the crowds of people. I couldn’t see where they were shooting from, but I didn’t hesitate to dive down with the crowd. Everyone was holding on to someone else, it didn’t matter if you knew the person or not, at the sound of fire you grabbed the person next to you and tried to shield them, and yourself.

We heard another round of live ammunition and suddenly a young boy standing approximately five feet away from me fell to the ground in the middle of the crowd. He lay on the ground with his arms wrapped around his neck. Everything happened so fast that it took a few seconds for the people surrounding him to realize that he had been shot. Soon after a group of people carried him away but I was unable to see where he was being taken as the heaviest and longest lasting round of live ammunition began. The crowd immediately ducked and began to move backwards; some people crawling while others ran.

Two people have been killed and over a hundred others were wounded. The aim of the protest was to walk to Jerusalem and pray. I’m not sure if people thought this was truly possible, but I think at the start of the demonstration there was hope.