After Friday prayers at the mosque in Huwwara, villagers began marching in solidarity with the victims of the Gaza massacre. The protest included many children, some of whom were carrying signs in support of their Gazan brothers and sisters. Two Israeli military jeeps were along the route, and some of the soldiers were taking pictures of the peaceful protest. As the procession wound its way back to the mosque, a settler suddenly raced alongside and slammed on the brakes.

“He was about a meter away from the kids and just started firing out the window of his car,” stated a witness. “It was clear he was trying to kill people.” The settler managed to shoot four people before fleeing the scene. 19-year-old Khalid Owda died from a gunshot wound to his abdomen, while Tarik Dmadi was shot in the chest and remains in critical condition. Hassan Dmadi was shot in the hip, while Jihad Owda was shot in the hand and has been released from the hospital.

“Had he had more ammunition, he would have kept on shooting and killed more people,” said a witness. “Killing Palestinians is no big deal for the settlers, because there is no punishment. And what about the soldiers? They were just standing there, doing nothing.”

Tragedy struck the town of Huwwara a second time two hours later, when an Israeli sniper gunned down 18-year-old Tayeb Shohaada, who, like Khalid Owda, was a  student at an-Najah University in Nablus. Israeli forces were shooting tear gas at Tayeb and roughly ten other young men, who were throwing stones in their direction from a distance of approximately 100 meters. According to Red Crescent medic, Ahmed Owda, a female Israeli sniper shot Tayeb in the face. Her sergeant then congratulated her and clapped her on the shoulder. Ahmed subsequently attempted to reach Tayeb but was unable to do so because of Israeli fire. Tayeb was eventually taken to Rafidia hospital in Nablus, where he was declared clinically dead.

The attending surgeon revealed that the damage to Tayeb’s brain was consistent with that caused by expanding bullets. Expanding bullets are banned according to the 1899 Hague Convention, but Israel has frequently been accused of employing them against Palestinians. 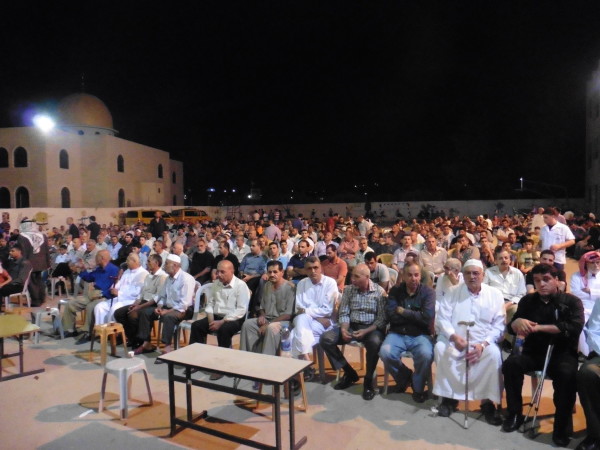 Memorial ceremony for both Khalid and Tayeb (photo by ISM).