Palestinians threatened by settler and then detained by soldiers

At approximately 23:30 on the night of the 21st July, I noticed a group of Israeli soldiers detain four Palestinian men near our apartment. The men detained were Ahmed, Izzat, Anas, and Muhammad. They were ordered to sit on the ground by several armed soldiers. A settler male, armed with an assault rifle, was talking to one of the soldiers.

Ahmed told me that the settler had threatened to shoot them with the gun he carried.  There were other Palestinians who were observing, and among them a woman who corroborated their statements, and who had a camera with her. Three TIPH observers (Temporary International Presence in Hebron) were also present. One of them confirmed that the settler was the one who started the confrontation, by pointing his gun at the unarmed men. According to Ahmed, after the settler threatened them, he asked nearby soldiers for help. The soldiers responded by detaining the three Palestinians whom the settler had threatened.

I asked the soldiers why they are detaining the men, and was told it was not my business. 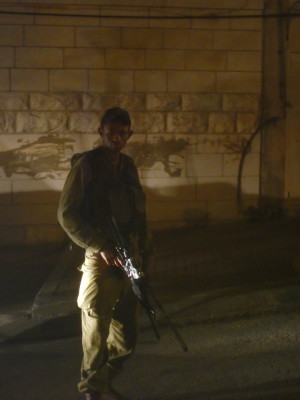 They ordered me to move back. The soldiers grabbed the four men roughly and marched them away uphill.

Upon being asked what was happening, the soldiers claimed that the men were not being arrested, only taken “for a talk” to the military base. I asked them if they are aware that TIPH had documented that the settler was the one at fault, and if they were intending to detain the settler. I was told to move back or face arrest. Palestinians observers were also ordered to move back.

People were taking photos of the soldiers, so one soldier began taking pictures of us with his cellphone. A settler appeared with two children, and began shining a green laser light into people’s eyes. Some of the soldiers found that very funny. 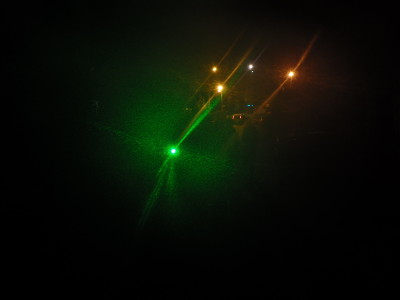 About an hour later, Ahmed, Anas, and Muhammad were released. Izzat was not with them. Ahmad said that on the way to the base, one of the soldiers struck him across the back.