Israeli airstrikes bombed a major water line and sewage plant west of Gaza City, last Wednesday afternoon, which provides water to tens of thousands of citizens and is regarded as the main water line for al-Shati refugee camp west of the city.

The director of the Water Department in the Municipality of Gaza, Saad Eddin Al-Atbash stated, “Israeli aircraft targeted a sewage plant west of the city, which serves the areas of al-Shati Camp, Tel al-Hawa neighborhood, Sheikh Ajlin, and the western areas of Gaza City, which pumps 25,000 cubic meters of waste water daily to the public treatment plant.” He continued, “While the city is working on improving the water supply systems for the citizens in Gaza, Israeli forces are working on the destruction of water wells in order to increase the suffering of the citizens during the summer.”

This waterline provides water to more than 70,000 people, and it takes several days to repair.

Bassam Al-Raee, a citizen in Gaza City, stressed that the water crisis has been going on since the beginning of the summer, indicating that the targeting of the well will make things even harder than they already were, making life even more difficult for citizens in the area.

“The warplanes targeted two water wells, one of the wells is owned by the Islamic Society near Maqousi towers, and the other is in Zaytoon town where both water wells feed nearly 7000 people,” said Al-Atbash.

He stressed that the Israeli forces targeted more than five water-lines that are located in vital areas, pointing out that just one single water-line services more than 20,000 people. 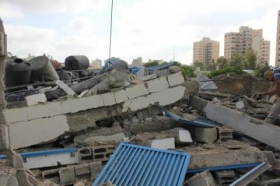