New
Home / Gaza / Gaza Ministry of Health: “Gaza surgery being performed in corridors, on the floor

Gaza Ministry of Health: “Gaza surgery being performed in corridors, on the floor

Gaza hospitals are operating under impossible conditions, with surgery now being performed in corridors and on the floor due to the sheer numbers of wounded from massacres such as Shati park, UNRWA school and Shujeiyah market. 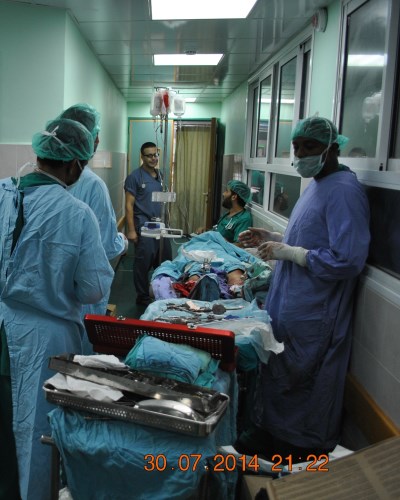 Surgery in the corridors (photo by Gaza Ministry of Health).

Lack of theatre space sees two persons being operated on at a time in the same theatre, while others receive surgical interventions in the corridors.

Even beds are in such short supply that surgeons are forced to undertake complicated procedures while their patients lie on stretchers on the floor.

There is nowhere to send the patients post-operatively, with Shifa ICU full, and no vacant beds in surgical wards. Some surgical cases have been sent to maternity and internal medicine hospitals, and to other hospitals outside Shifa medical complex.

Despite 30 patients being ready for discharge, they literally have nowhere to go. These 30 beds are desperately needed. 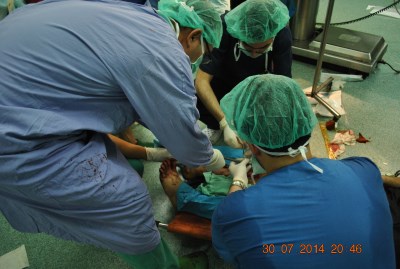 Performing surgery on the floor of the corridor (photo by Gaza Ministry of Health).

Wards are full to overflowing, with patients lying on mattresses in the corridors. It has deteriorated to the extent that patients have even been sharing beds, and others are being discharged prematurely.

In many cases no patient notes are being recorded contemporaneously or files created because the staff just cannot take the time away from treating the high volume of patients. Some details are being recorded afterwards, but this is less than ideal.

These conditions are a recipe for disaster.

Infection control is well-nigh impossible, and post-operative complications including death will be inevitable.

Deaths are already occurring from a lack of timely treatment, as the numbers of patients far exceed the capacity of the staff. We estimate that we have a 50% shortfall in staff numbers to deal with the case loads presenting for treatment, resulting in some patients receiving suboptimal care and others receiving none at all.

Current staff are as overburdened as the facilities they serve, working without pay for 24 hours on a day-on, day-off roster. All surgeons and surgical staff have been recalled, to cope with the sheer numbers. They are suffering enormous stress, not only from lack of rest, the horrendous injuries they are dealing with and the under-resourced conditions under which they work, but also due to constant fear for their families, and fear of attack as hospitals have increasingly become targets of Israeli fire.

The Ministry of Health Gaza calls for: