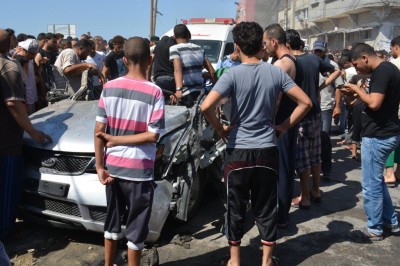 Yesterday, shortly after three o’clock local time, two men were killed in their car. Two missiles struck it only about 100 meters from former prime minister Ismail Haniyeh’s residence in Shati (“Beach”) refugee camp. Ambulances soon arrived and took the two men to al-Shifa hospital, where both were immediately pronounced dead.

They were Muhammad al-Fasih and Osama al-Hassumi, both members of the armed wing of the Popular Resistance Committee. This was the first targeted killing by Israel since the formation of the new Palestinian coalition government. So eventually it happened.

The using of drones in extrajudicial killings in densely-populated area shows the occupying power’s lack of concern for the safety of civilians.

Who controlled the drone, we will never know. Extrajudicial execution. So simple. So convenient. No time-consuming and costly court proceedings. No bickering with the defense counse. Just a drone and a faceless pilot in a command center at a safe distance; a court, jury, and prosecutor in one. An action in accordance with a just state? 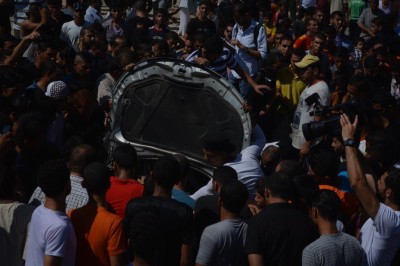 Shortly after three o’clock in the afternoon. People everywhere. Anyone in the vicinity could have been killed. There could have been more passengers in the car. Was this also a message addressed to Haniyeh? Was it a warning of a time to come?

Ambulances and fire trucks were already there when I arrived. The place was crowded with people, most of them around the wreck. I asked one of the youngsters if it was an attack from a drone. He replied in good English that there were two missiles from drones, but with a trembling voice, vibrant with anger, shock and fear. He tried his best to control himself, his jaws clenching, close to tears. I lowered my camera and asked if he was okay. A stupid question: I could see clearly how he felt. Of course not, he answers, this is Gaza. I took him in my arms, momentarily worried about how he would respond with his friends around him, but he welcomed my hug and I held him, pressing him against me. Yes, this is Gaza. No, it’s not okay here.

Drones continue to circulate above. Are they ooking for new targets, or are other faceless pilots at safe distances just curious about the outcome of their colleague’s attack? Will the images appear on the evening news of the successful intervention? Of the remains of what was recently a car with two living people in it? Will viewers see a Westerner are standing and holding a Palestinian with his eyes tightly shut?

A drone, two missiles. Court, jury, and prosecutor in one. Bangs when they detonate, no echo from the outside world of just states afterwards. So simple. So convenient.