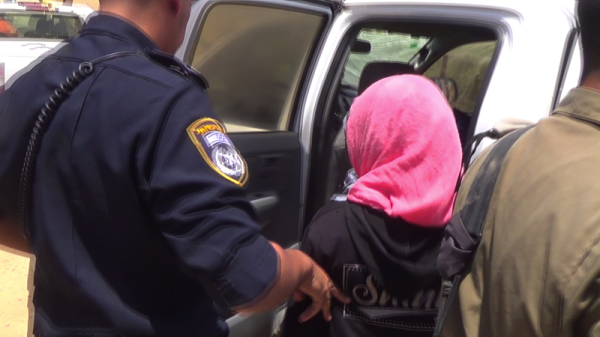 On May 27th, four Palestinian 12-14 years old girls from the South Hebron hills villages of Tuba and Maghayir Al Abeed were arrested by the Israeli police on the charge of theft of cherries in a field in which Israeli settlers from Ma’on settlement are growing several cherry trees.

This grove is situated close to the place in which the children usually wait for an Israeli military escort, in order to go home. The escort was established in 2004 by the Children’s Rights Committee of the Knesset because of the ongoing attacks against the Palestinian children (coming from the nearby villages of Tuba and Maghayir Al Abeed to the school of At Tuwani) from Havat Ma’on and Ma’on settlers.

At 11.00 am, while the children were walking accompanied by the Israeli military, a car with a few settlers inside stopped in the middle of the street, avoiding the possibility for the children to continue the path. Israeli settlers stated that some children had stolen cherries from the grove.

So, the Israeli soldiers forced the children to sit down on the road under a hot sun without any access to water, preventing them from going home.

The Palestinian children asked the Israeli soldiers to show some evidence supporting the accusation that the settlers madeagainst them, they wanted to see videos and photos supporting, but the Israeli army didn’t give them any information. Some minutes later, also the Ma’on security coordinator arrived where the children were stopped, accusing them of theft, even though he wasn’t present at the moment the supposed event occurred.

At 11:50 am the Israeli Police arrived. The police officer asked one settler if he recognized the children that he saw in the cherry trees fields. The settlers identified four young girls. The girls were then forced to go in the Israeli police car.

The other students were accompanied along the path by the Israeli army.

The four young girls were detained in the police car for one hour. Then the girls were taken to the Israeli Police station of Kiryat Arba and brought for interrogation, without their parents being present.

According to +972 magazine the lawyer who is representing the minors spoke with the police on the phone and she was told that two girls were released once their parents were contacted (one is 12 years old, the other seems to have speech disabilities). The two others were being held for questioning and released later. According to Haggai Matar, “it would be illegal for the police to question them without the presence of their parents”.

At 4:00 pm the Israeli police sent them to the Palestinian police in Hebron, that didn’t want to release them until their family identified them. So, at around 7:00 pm, the girls were released.