Daily Harassment in the Qeitun area

Residents of Qeitun area of Al-Khalil, near Shuhada St. are presented with a very different kind of daily routine than other areas of the occupied West Bank. Israel occupation forces not only raid houses and harass people on a daily basis, but also use the local population as part of their military training.

On Tuesday, the 29th of April, the Israeli army was training for the erecting and working of a flying checkpoint, pulling over cars on the main road of the area which leads to the military base, also called Qeitun. During this training the commander was instructing the soldiers how to stop and search drivers and their cars. 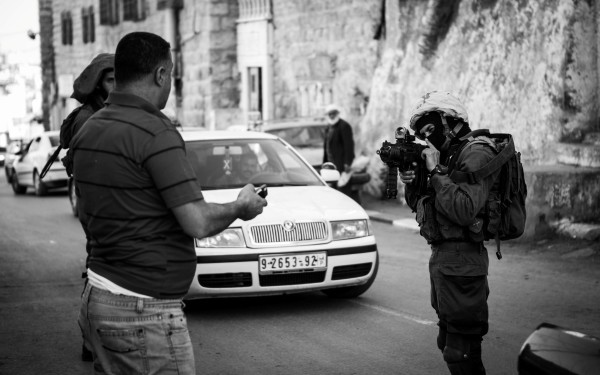 Two days later, on Thursday 1st of May at 11:30pm, ISM activists were called out to witness the Israeli army performing a massive operation of night raids, with approximately 100 soldiers. When the activist got to the area, the army had detained an 18-year old. The youth was released 30 minutes after the arrival of the activists. Many of the local people, still in their nightdresses, were out in the streets while the soldiers were inside their houses.

At around 1:00am the soldiers left the area and had what seemed like a quick evaluation of the whole operation, making it difficult to know whether it was an actual military operation or just some sort of training, similar to the flying checkpoint training that took place two days earlier. For the people of Qeitun there’s no actual difference between “training” and a live military operation of the occupation forces.

In an ISM visit with a family of the Qeitun area, they report that the soldiers have been starting the raids as early as 9pm and had raided a total of 50 houses. They also reported that during one of the raids the soldiers had broken into a house with such violence that an elderly woman with a heart condition, had gone into coma and had to be rushed to the hospital.

The family reported that the area experiences night raids at least two or three times a week. Israeli soldiers enter and harass the locals on a daily basis and the army has arrested two minors during the last month.

During the second intifada almost all families living in the houses located near Shuhada St. were forced out by the Israeli army, allegedly for security reasons, making this part of the area a ghost town.