Palestinian administrative detainees began an open-ended hunger strike on the 24th of April this year, currently there are 95 detainees on hunger strike and more detainees will periodically join if their demands for freedom are not met. Actions will be held in the West Bank and Gaza on Friday 16th of May in solidarity with the detainees and their families. We encourage activists to join this global day of action to show their solidarity and to raise awareness on this issue by organizing demonstrations in front of Israeli embassies across the world.

Currently there are 183 Palestinian administrative detainees in Israel’s custody, 9 of them are members of the Palestinian Legislative Council. Administrative detention is a procedure that allows the Israeli military to hold prisoners indefinitely on secret information without charges or trial.

Administrative detention is the most extreme measure that international human rights law allows an occupying power to use against residents of occupied territory, whom are defined as “protected”. States are not allowed to use it in a sweeping manner, specific procedural rules must be followed and it must be done on an individual case-by-case basis without discrimination of any kind. However the state of Israel routinely uses administrative detention in violation of the strict parameters established by international law, claiming to be under a continuous state of emergency, sufficient to justify the use of administrative detention since its inception in 1948. 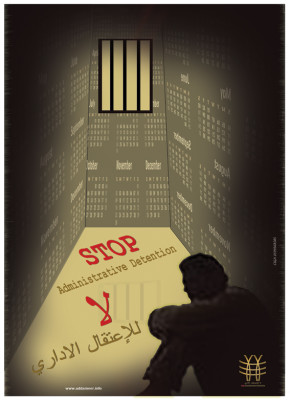