New
Home / Gaza / What will Gaza’s Ark face from the Israeli navy as it challenges the blockade?

What will Gaza’s Ark face from the Israeli navy as it challenges the blockade? 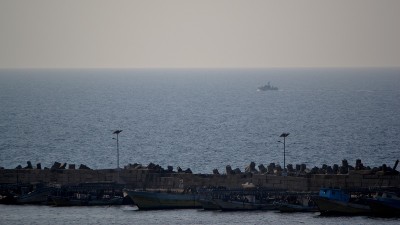 An Israeli gunship cruises near the Gaza seaport. (Photo by Rosa Schiano)

The heavy bang is heard clearly, and I have to resist the impulse to climb over the breakwater to try to get a view of the attack in the haze. And a new round of bangs is heard. It can’t be far off the port of Gaza. Instead, I look up at the sky, squinting, and there it is, the drone that been circling around all morning. And I return to my work to completing Gaza ‘s Ark.

Shall I write about this, I wonder to myself? That thought pops up every time I hear machine-gun fire, or even heavier bombardments, from the sea. We expect some influential people to sail with us to break Israel’s naval blockade, and I do not want to scare them off. It is important that they are on board. It’s one thing to know about the abuse from a report, but another when you it happening a few nautical miles away, in the same water we will sail in a few months. I am afraid of painting too vivid a picture of what awaits us.

What is it that awaits us? Will we be boarded, have the ship ransacked by heavily armed and masked marines searching for Palestinians? Will they seize the Ark? Or will they let us pass, allow us to break the blockade only to close it behind us, and then continue shelling fishermen as if nothing happened?

And what responsibility do I have to inform our prospective passengers about the various potential scenarios and what the risks are? Stun guns. Blows with rifle butts. Gunshot wounds. I do not want to scare anyone away from participating, but I cannot lie, pretending everything will necessarily go well.

It should be fine. There is no legitimate reason to stop us. But that does not mean they will let us pass. They can claim that one of the Palestinians on board is wanted, that no Palestinian can leave without permission from them, the occupying power, accuse us of trafficking. Perhaps we will hear machine gun fire at a very close range. Perhaps the Ark will be hit. It has been shot at before. I carved through the wood for bullets earlier, and have given two of them away, as Israeli souvenirs from Gaza. Will there be more?

I do not want to scare anyone, but how will they react when they hear the heavy shelling as they get on board? They can’t say they did not know anything – then they would not come here! – but it is quite different when you hear and see what happens, rather than reading a report. And above, the annoying drone is heard.