On April 2 the Israeli army together with some Border Police and District Coordination Office (DCO) officers demolished six shelters made of concrete in the Palestinian village of At-Tuwani.

Under the directions of DCO officers six shelters were demolished by the bulldozer; two of those were already completed and two others still under construction. On March 2, a DCO officer had come to the area and took pictures of the shelters but no demolition order was delivered.

At 10:10 am the convoy left. Palestinian inhabitants of Al Mufaqarah, the owners of the shelters, B’tselem operators and international volunteers were present on the place.

At-Tuwani and Al Mufaqarah villages are located in Area C, under Israeli military and administrative control. That means that all the constructions must be approved by the Israeli administration. Israel denies Palestinians the right to build on the 70 percent of Area C, which is about the 44 percent of all the West Bank, while within the remaining 30 percent a series of restrictions are applied in order to prevent Palestinians from the possibility of obtaining permits (source: OCHA oPt).

While the Palestinian and Bedouin villages of Area C suffer from Israel’s ongoing policy of demolitions and threats, the nearby outposts and settlements continue to expand. The Israeli illegal outpost of Avigayil since three years has been expanding in south-east direction with new houses and a fence that annexes always more Palestinian land. The Israeli illegal outpost of Havat Ma’on is always expanding despite continuos complaints from Israeli activists and International volunteers who fornish proofs of the works. The Israeli settlements of Ma’on and Karmel are expanding in particular since the Israeli government’s planning commitee approved the construction of 5170 new units in West Bank settlements in the spring of 2013. In the beginning of February 2014 a new fence was built around the south-eastern side of Ma’on, annexing even more meters of Palestinian owned land. 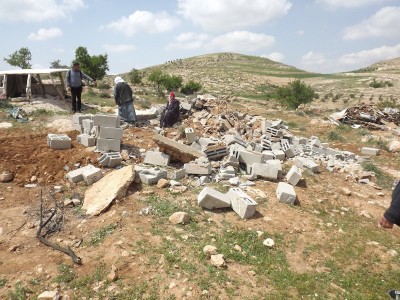 Video of the incident: available soon on www.tuwaniresiste.operazionecolomba.it