New
Home / Nablus / Demolitions in Bruqin: “If you really want peace, you wouldn’t take what’s mine”

Demolitions in Bruqin: “If you really want peace, you wouldn’t take what’s mine”

On the 1st of April, at approximately 5.30 AM, a bulldozer and eight military jeeps arrived in the village of Bruqin close to the city of Nablus. The bulldozer first destroyed a farmers shed, killing the ten rabbits inside. The destruction continued as a caravan belonging to another farmer was also demolished, and finally later the same night, a building belonging to a farmer in the nearby village of Beit Furik was also destroyed.

This is just one of many nights where Palestinian property has been demolished by the Israeli army. Inside the village of Bruqin a girl’s school, recently financed by US Aid, is threatened by a demolition order.

The mayor of Bruqin spoke to an ISM activist after the demolitions:

“I talked to some Israeli settlers one week ago, and told them that we could live in peace, together. But they replied that they want another 700 dunums of land from Bruqin. So, I don’t think that they want peace. If you really want peace, you wouldn’t take what’s mine”.

The resistance in Bruqin against the illegal expansion of settlements continues. The day after the demolitions, men, women and children of the village went out on the hills close to a nearby illegal settlement and planted olive trees. 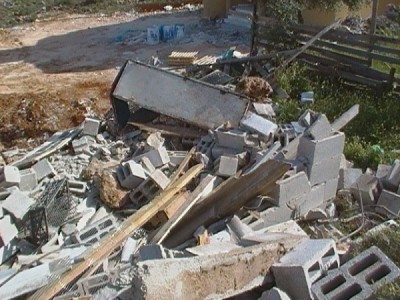