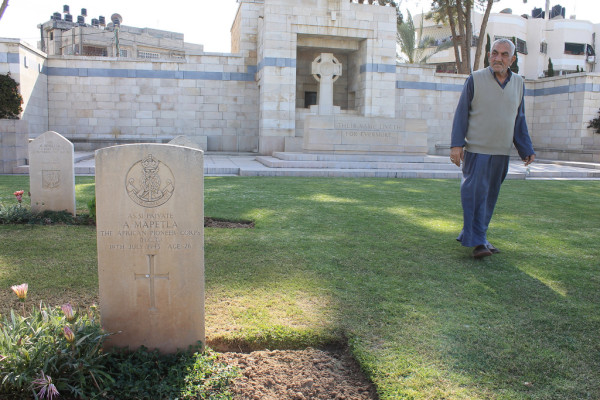 On a recent, sunny afternoon, Kath Henwood, a Yorkshire paramedic volunteering in the Gaza Strip, walked through rows of headstones at the Gaza War Cemetery with a camera and notebook.

“My regular crewmate at work, in his spare time, researches World War II,” she said. “He’s really passionate about it.”

When Henwood learned of the cemetery, she said, “my first thought was to tell him about it.”

The cemetery, off Saladin street in northern Gaza City, is one of thousands maintained by the Commonwealth War Graves Commission (CWGC), a consortium of Australia, Canada, India, New Zealand, South Africa and the United Kingdom.

It contains 3,691 graves, all but 474 of them for First World War troops from the Commonwealth of Nations. A further 210 are from the Second World War.

Others include Egyptian and Turkish soldiers, as well as Canadian United Nations peacekeepers.

Their memorials, from simple headstones to an imposing “cross of sacrifice” — a memorial found in numerous CWGC cemeteries — reflect their varied faiths: Christian, Jewish, Hindu, Muslim and secular.

And the careful landscaping and quiet solitude around them make the cemetery an attractive destination for everyone from picnicking families to students looking for a place to study.

After she told him about it, Henwood’s colleague sent her a list of 19 graves, and asked that she photograph them.

Later, sitting on a marble bench in the shade of the cross of remembrance, he spoke about the cemetery and his life taking care of it.

“Killing is no good”

“War is war, and killing is killing,” he said, passing a hot cup of sugary tea. It was a theme to which he would return again and again.

Now 77, Jeradeh started working at the cemetery, then overseen by his father, when he was 20. He officially retired as its head gardener at 65, when his son Issam replaced him.

“I don’t know about politics,” he said of the changes that have affected the cemetery over nearly a century since its founding by British forces after the Third Battle of Gaza in 1917. “I know about the trees.”

But politics have rarely left Jeradeh or his trees alone for long.

In 2006, Israeli troops bulldozed the cemetery’s perimeter wall and six of its headstones. Months later, an Israeli military helicopter fired its cannon at one of the large memorial stones.

“Two dozen other headstones have been pockmarked by shrapnel from Israeli artillery and several have been completely destroyed,” The Daily Telegraph newspaper reported (“Fury as Israelis damage war cemetery,” 13 November 2006).

During Operation Cast Lead, Israel’s military offensive against the Gaza Strip in late 2008 and early 2009, Israeli forces bombarded the cemetery, striking it with at least five shells and singing its grass with white phosphorous (“Israel shelled UK war graves in Gaza,” The Daily Telegraph, 20 January 2009).

“There were no fighters here,” Jeradeh said.

After each of these attacks, the British government lodged rare demands that Israel compensate it for the costs of repairing the cemetery.

“We repaired it,” Jeradeh said. “All of it. Alhamdulillah [Thanks to God], it is like new.”

The Israeli siege of the Gaza Strip has also affected the cemetery. In February 2009, a year after Paul Price’s appointment as CWGC’s regional supervisor for Israel and the occupied Palestinian territory, he had yet to be allowed by Israel to enter Gaza (“Battle still rages where my great-uncle fell in Gaza back in 1917,” The Observer, 22 February 2009).

In May 2013, a year after a seemingly simple pump failure had left the cemetery’s grass and flowers parched, the CWGC said that finally replacing the pump “proved challenging” (“Gaza war cemetery returns to former green glory,” Commonwealth War Graves Commission, 30 May 2013). 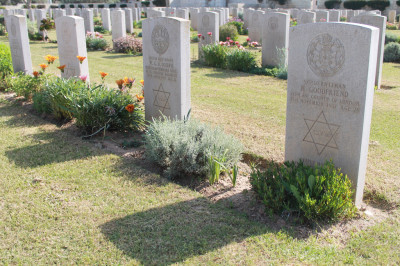 Despite its foreign affiliations — which ultimately afforded it some protection — the cemetery has also been targeted by Israel culturally, as well as militarily.

Following Israel’s 1967 seizure of the Gaza Strip, Moshe Dayan, then Israeli defense minister, sought to exhume the cemetery’s five Jewish graves and take them to Israel.

The attempt came as Israeli forces looted thousands of historical artifacts, particularly Jewish ones, from their newly-occupied territories, an effort in which Dayan participated enthusiastically as both a military official and a private collector (“Stealing Palestine’s history,” This Week in Palestine, 1 October 2005).

“I refused,” Jeradeh said, his eyes bright. “I was young then. I told him, ‘Go to our office in London.’”

“No difference”
“They are buried here. How could he take them? The Jews here are Jews, not Israelis. There is no difference here between Jews, Muslims and Christians. They are all human.”

Surrounded by fields of grass and rows of colorful flowers and polished stones, the troubles of occupation and siege seemed as distant as Jeradeh’s clash with Dayan.

Maintaining the cemetery’s immaculate condition is hard work, Jeradeh said, even in retirement.

“This is the best, cleanest place in Gaza,” he said. “I work hard to keep it nice.”

Officially, since his mandatory retirement, Jeradeh has served as the cemetery’s night watchman. “I keep this place completely safe,” he said.

In practice, his work as a gardener has continued, if not at the same rate.

“I don’t buy plants,” he said. “I use the ones from my nursery. And I teach the people who work with me.”

“You see all that?” he asked, his arm sweeping across the cemetery. “My drawings.”

“I am always here. Where else should I go? Twenty-four hours a day.” Still, he acknowledged that his pace may have slowed. “Seventy-seven years is a long time.”

He also spends time with visiting family, including four sons and nine daughters. When asked how many grandchildren he had, he laughed.

“I don’t want to remember,” he said, gesturing at a group of small girls peering curiously from behind a row of headstones. “More than a hundred. But they live outside, in Gaza.”

“I like to study,” he added. “I read books on history, geography, horticulture, medicine, everything. I am always reading. And I like writing. Every day, I write what happened to me.”

When asked how long he has kept his journals, he laughed again. “I don’t remember. I have books like this,” he said, gesturing at the height of his shoulder.

“But I started when I was young, and continued day by day, year by year.”

“You are happy writing here,” he said, pointing to a notebook. “The head is clear for it.”

He showed his study, a detached building, behind the larger gardener’s quarters at the cemetery’s edge, equipped with a personal computer and filled with stacks of books and printed articles.

“The pencil is dangerous,” he said. “The man who succeeds in his life writes the facts.”

Returning to the lush greenery of the cemetery, he said, “I don’t feel any problems here … Any man, if he likes others, the others like him. If you do good for others, others do good for you.”

“Everybody knows that war is war, and killing is killing,” he repeated, gesturing again at the thousands of stones surrounded by his carefully-tended flowers.

“Now everything here is history. No one here hates anyone else.”

Joe Catron is a US activist in Gaza, Palestine. He co-edited The Prisoners’ Diaries: Palestinian Voices from the Israeli Gulag, an anthology of accounts by detainees freed in the 2011 prisoner exchange. Follow him on Twitter: @jncatron.