On Friday 7th March the protest at An Nabi Salih took on a special significance after local Palestinian man, Moutaz Washaha, was assassinated in his home town of Bir Zeit on Thursday last week. A group of more than 50 Palestinian locals, activist and journalists gathered for the weekly demonstration against the expropriation of the village’s water spring, which has been diverted to a settlement close by. 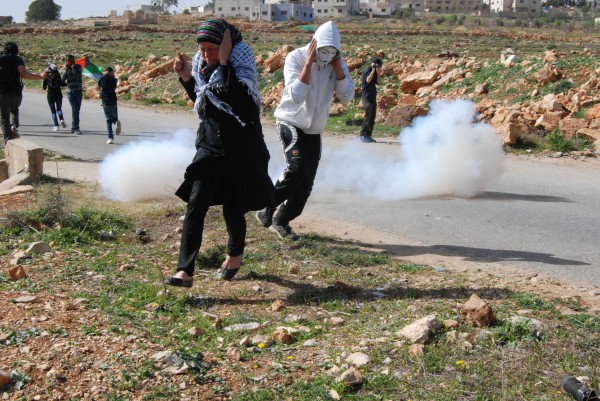 The protesters, proceeded away from the village down the hill towards the street which separates the village from Al Qaws spring with was stolen by the illegal settlement of Halamish in 2009. Israeli forces launched a slew of teargas against the unarmed protestors.

Four Israeli soldiers intercepted the protestors at the settlement road and unsuccessfully attempted to arrest two protestors. After some 25 protesters had made it onto the road more soldiers arrived and attempted to violently arrest two young girls who had entered the road. One of the girls is 14 years of age and she was met with physical violence from soldiers who were intent on arresting her. The protestors prevented the arrests, however during their attempt a soldier hit a local woman in the back with his rifle butt causing her to faint. Activists then called for a local ambulance and gave first aid while local Palestinians argued with the soldiers over their behavior. 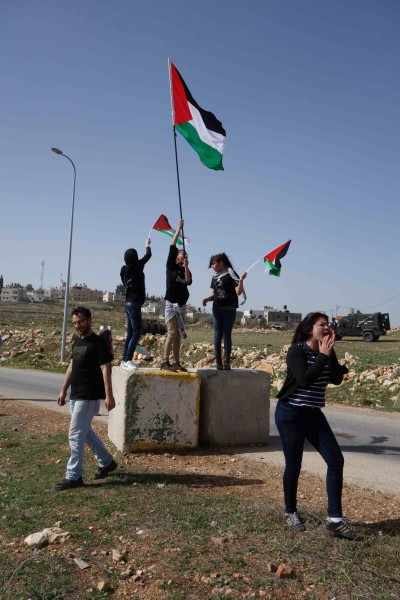 Palestinians continued marching along the road past the illegal settlement while soldiers threw stun grenades into the crowd. On reaching the observation tower local children climbed onto the road blocks flying the Palestinian flag while soldiers and police looked on. The main body of the protest moved back to village while clashes continued resulting in at least 5 injuries from rubber coated steel bullets and one case of excessive tear gas inhalation. Some Palestinian women reported sexual harassment by Israeli soldiers as well as verbal assault joined with physical violence.

The village of Nabi Saleh has been demonstrating against Israeli colonialism for 5 years now, they have lost two local Palestinians in these demonstrations. Mustafa Tamimi who was shot with a teargas canister from close range in 2011, and Rushdi Tamimi killed with live ammunition in 2012. The village’s persistence continues in the face of Israeli brutality.