Two ISM activists walking on Shudaha Street area were brutally attacked by French Zionist tourists who were visiting to attend the weekly settler tour of the Palestinian part of Hebron. 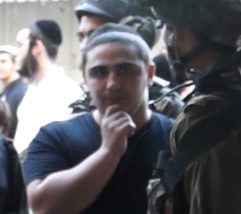 Zionist perpetrator responsible for the attack.

The other activist was chased, tripped and kicked in the body and face by the Zionist assailant until he was chased away by the two soldiers. On gaining his feet, the activist was punched in the face by the man who had just chased his companion away. The activist ran and the army stopped his pursuer.

The incident was reported to the police, who found two of the attackers in Shuhada Street and took their details. They were not detained as it was the Sabbath when religious Jews are rarely arrested. The activists were taken to a local Police station to make a statement and overheard aggressive integration of a Palestinian prisoner.

We also received a report that an Italian tourist was attacked by 10 religious Zionists in the city on the same day of the attack. After his beating, was told that if he wants to come back he must wear a Kippah.