New
Home / Gaza / A specter is hunting Israel: the specter of the BDS movement

A specter is hunting Israel: the specter of the BDS movement 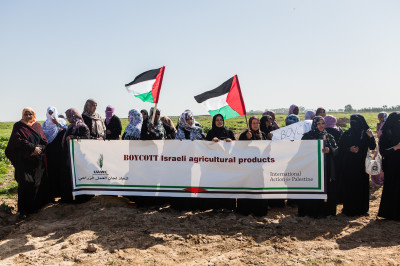 A 9 February 2012 UAWC demonstration for the boycott of Israeli agricultural products by the “buffer zone” east of Gaza. (Photo by Desde Palestina)

While Israeli ministers are discussing the usage of lawyers and the Mossad to fight boycott, divestment and sanctions (BDS), in the besieged Gaza Strip, like in 250 other cities around the world, activists, students and representatives of organizations are preparing for the tenth annual Israeli Apartheid Week, the worldwide campaign to raise awareness of the brutality of the Israeli apartheid regime and occupation through lectures, rallies, film screenings and conferences.

One of the changes for IAW 2014 in Gaza, organized by the Preparatory Committee for Resistance to Israeli Apartheid through five preparatory workshops from 22 February to 6 March, will be the key role played by the Union of Agricultural Workers Committee (UAWC), which will involve fishermen and farmers in activities scheduled from 9 March until 13 March.

One of UAWC’s main goal is to make fishermen and farmers aware of the BDS call launched in 2005 and its potential. It organized several workshop about BDS through its local committees.

“The BDS movement must include all Palestinian sectors, such as fishermen and farmers, because the Israeli apartheid policies directly affect them,” said Saad Ziada from UAWC. “Israeli occupation forces prevent our sea from being sailed and worked, while they are using it. This is a clear example of discrimination and apartheid policies.” 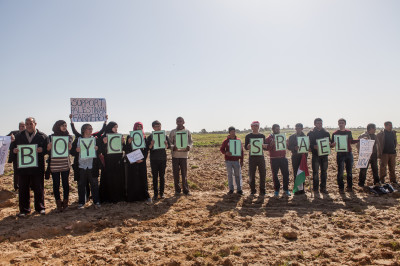 The aim of IAW 2014 in the Gaza Strip, where Israel controls the borders, territorial waters, airspace and, due to the Paris Protocol signed in 1994, the economy, is to “raise awareness among the Palestinian people in order to get them to help BDS outside Palestine and Gaza – where goods are supplied through Kerem Shalom checkpoint and Israel often monopolizes the market – showing how the boycott, divestment and sanctions movement affects the Israeli occupation,” said Mohammed Abu Samra, a member of the Preparatory Committee and the Palestinian Students’ Campaign for the Academic Boycott of Israel (PSCABI).

“Why did we choose to fight through BDS movement?” Mohammed says. “First, the experience in South Africa proved that it is effective. It succeeded in the past. BDS gives us a wide area to involve people and is based on international law.”

“We want to thank all the BDS activists around the world for their activities and their huge amount of work,” he added. “This is an historic moment to prove the success of the BDS movement, to prove that we can isolate the Israeli state. We ask for even more pressure. We ask the international community to implement all the resolution to guarantee us, Palestinian people, our main rights.”

In the besieged Gaza Strip, IAW 2014 activities will start on 9 March with an opening ceremony at the Palestine Red Crescent Society offices in Gaza City, where recorded video messages from Omar Barghouti and Ahmad Kathrada will also be displayed. It will then spread across the universities and municipal halls of the Strip, ending in the Gaza seaport with a final demonstration that, according to UAWC, at least 600-700 people should attend.