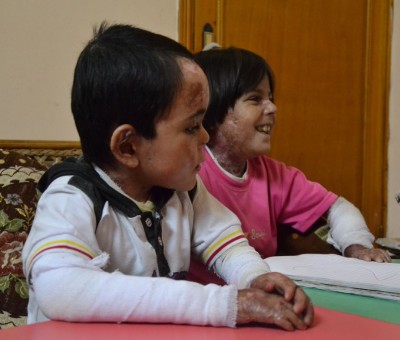 Epidermolysis bullosa is an exotic name for what is, in its most severe form, unusual, painful and fatal disease. It is caused by a deficiency of the protein that binds the two skin layers together, creating friction, blisters and open, slow-healing wounds. These blisters and erosions occur Even on internal mucous membranes. The wounds are similar to third degree burns, and children – victims of its most severe form will rarely be older than that – are also more prone to skin cancer. A cure does not exist.

In Daniela Riva’s apartment in Gaza City is a party, with cakes and cordiality. Some of the affected children are there, along with some siblings and their mothers. It is a merry atmosphere. They are playing, and there is some strife about whose turn it is to bowl with a Wii video game. One of the girls after a long, fascinated look at my red beard and blue eyes, borrows my notebook and draws a big heart. It takes her some time to fill it in.

They are unusually short, and have red sores on their faces. Their bodies have to put much effort into heal the wounds, as much as possible, and keeping the symptoms of the disease in check. Those at the party look six or seven years old. In fact, they are about ten years old. And they move stiffly, mainly as a consequence of all the bandages they wear – bandage that keep a special kind of layer in place to prevent their clothes from sticking in their wounds and allow them to live reasonably normal lives without the pain that any contact otherwise will cause – but their movements would be strained even without these bandages. Their stiff skin makes them turn their bodies simultaneously with their heads, and their fingers are becoming more and more hunched and rigid.

R – let us call her that – is the most active during the party. She is ten years with a catching smile, although it reveals her effected teeth and gums, and with a small hand, most similar to a human claw, she tries to get her hair in order.Her eyes reflect a curiosity. She is everywhere in the room and can’t sit still. But her breathing is strained, her voice is mostly a hiss and it’s hard for her to make herself heard. The disease also attacks her windpipe and throat. It is likely that her death will be caused by suffocation. 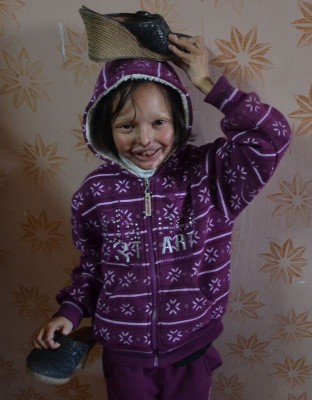 R know she will die. She knows she lives in constant proximity to death. That’s why she refuses to sleep with white sheets – it’s white sheets in which dead bodies are buried – and on a few occasions, when she had a cold and was barely able to breathe at all, asked to call a few friends to say goodbye. One of those she dialed was Daniela.

Daniela came to Gaza for the first time in 2008 to work in water and sanitation for an Italian NGO. She did not return to Italy until 2011. However, she did not spend all her time in Gaza, but traveled back and forth to Israel and the West Bank via the crossing at Erez. During the “Operation Cast Lead” military offensive, she was in Jerusalem. And it was when she returned after the war that she first saw a child, a boy about ten years old, with what appeared to be third degree burns.

She contacted Dr. Majdy Naim, at the al-Shifa hospital, who introduced her to other affected families. Together they advertised in newspapers and radio stations, and thus registered all in the Gaza Strip with the rare disease. Many of the parents had been unaware that there were more victims, but with Daniela’s help, they have now formed an association where they can get support and advice from each other, and through the association they seek assistance worldwide.

Her involvement with these children led her to stop working for the NGO that brought her to Gaza. Instead she got in touch with another, Debra Italy. They were so interested in what Daniela had to say that they made contact with a hospital in Rome, and in December 2012, she was back in Gaza with specialized surgeons who dilated the childrens’ esophaguses so they can eat normally, a procedure that needs to be done more than once during their lives. They also brought the special fabric that allows the children to live more functional lives, a product that cannot be found in the area.

The last time Daniela returned to Gaza, she brought a bag of this fabric. But it was not without difficulty. She was stopped by customs at the Cairo airport, where they requesteded a certificate from the Egyptian ministry of health allowing her to bring in medical materials. Without it, she had to pay ten percent of the value, which was $ 600, money she was promised to get back when she crossed the border to Gaza with the unopened bag. Of course she did not receive any money back in Rafah. But she got the material in, and it is needed. The bandages need to be changed every two to three days, a procedure that takes more than two hours, and between ten and fifteen layers are needed to cover the wounds, costing $75 to $125. The stock she brought will last 5-6 months. After that, the families can only hope that Daniela or someone else will enter with more.

R has one year left to live. Daniela has a dream to take her to Italy to let surgeons there assess if it is feasible to perform one last surgery in her throat, and to give her a nice final trip. I ask no more about it, suspecting that what she calls a dream is what most of us call a will, and I have seen what her will can achieve. Instead, I ask how come she is so self-sacrificing and continues year after year. She is now 36 years old, an age when most people are focused on their families and careers. It was a coincidence that made her start to work with children who have this disease, and as she explains, it just feels right to do it. She does not need any more reason than that.