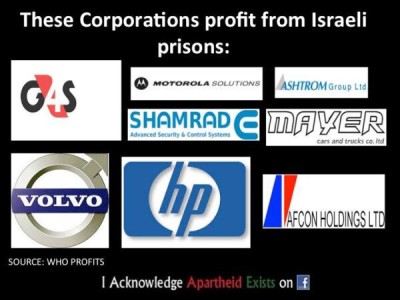 Who Profits released the following report on the involvement of Israeli and multinational corporations in the Israeli prison system:

On December 2013, the Israel Prison Service (IPS) responded to a freedom of information request by Who Profits, which was submitted three months earlier, regarding twenty-two corporations that provide services to Israeli prisons.

These companies mainly provide security equipment and services to incarceration facilities that hold Palestinian prisoners and detainees inside Israel and in the occupied West Bank. These incarceration facilities hold Palestinian political prisoners in violation of international law, and torture and systematic violations of human rights take place within their walls. According to Addameer’s latest monthly detention report (December 2013), there are 5033 Palestinian political prisoners in the Israeli prisons, 173 of whom are minors and 145 are administrative detainees.

The following table is an English translation of information provided by the Israel Prison Service to Who Profits, regarding twenty-two corporations that provide services to Israeli prisons and detention facilities.

Who Profits also provides documentation and research on several of these companies at the links below: