On Friday 24th January, 2014, the weekly demonstration in Kafr Qaddum, in the Qalqilya district, was repressed by excessive force, to a much greater extent than on most Fridays.

By 11:00 a.m., clashes had already broken out between local youths and Israeli soldiers and border police on the outskirts of the village. The demonstration was not due to begin until 12:00 p.m.

During the demonstration, Israeli forces fired high-velocity tear gas canisters at head height, as well as rubber-coated steel bullets. Five people were injured as a result.

A further seventeen people were treated for tear gas inhalation as canisters were fired both at protesters and into residents’ houses. Among those treated were an elderly woman and a two-month old baby.

In addition, Israeli border police detained one Palestinian for the duration of the demonstration. The man was in Kafr Qaddum on a social visit to his fiancée, and was captured in an ambush by Israeli forces. He was later released.

The people of Kafr Qaddum responded to the repression with stones.

Kafr Qaddum has held weekly demonstrations since July 2011 to protest against the closure of the road leading to Nablus, as well as the broader issue of the occupation itself. In recent months, the town has seen an escalation in the number of night raids and arrests of its inhabitants. 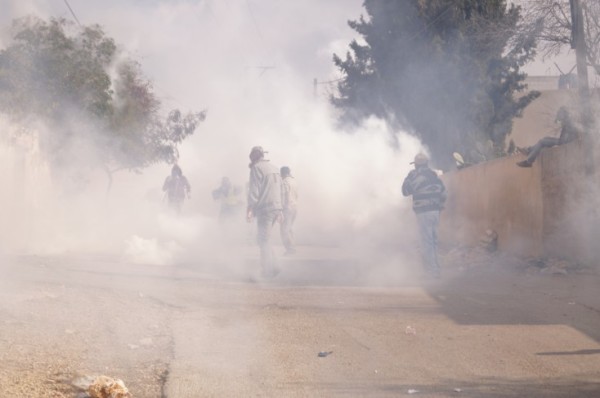