A Palestinian activist and an international were arrested today whilst peacefully protesting in the Jordan Valley. The international activist is falsely charged by Israeli forces with endangering people’s lives on the road, assaulting a soldier and trying to grab his rifle.

The march held in Jiflleck Adam Junction saw around 60 people gathered to protest against the ongoing demolition of Palestinian houses in the area. The protesters started their demonstration by chanting against the Israeli occupation of the West Bank and in opposition to Benjamin Netanyahu.

When the march was almost over and protesters were walking back to the buses, a group of 15 Israeli soldiers standing nearby followed the crowd and initiated clashes.

Two international activists attending the march were pushed to the ground and handcuffed by Israeli forces while successfully preventing the arrest of a Palestinian youth. One of the activists managed to escape from detention, but the other one was blindfolded and forced to kneel for over an hour on the ground.

Before scattering the protest, the military arrested the Palestinian youth, 20-year-old Ahmad Walid, whose arrest had been previously thwarted; he and the international activist were taken in a jeep to Male Akon Military Base and later transferred to Shomron Police Station in the illegal settlement of Ariel where they are currently being held.

Overall, around 40 Israeli soldiers, police and border police were present during the non-violent demonstration in which 60 people demonstrated peacefully. 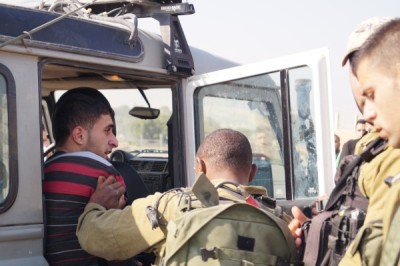