In an extra-judicial execution attempt, on Wednesday 22 January 2014, an Israeli drone fired a missile at a civilian car in Beith Hanoun, Northern Gaza. As a result, both passengers, a member of a Palestinian armed group and his cousin, were killed immediately.

According to investigations conducted by the Palestinian Center for Human Rights (PCHR), at approximately12:05 p.m., an Israeli drone fired a missile at a civilian Citroen car. Ahmed Mohammed Jom’aah Khalil al-Za’anin (21), member of an armed group, and his cousin Mohammed Yousif Ahmed al-Za’anin (22), both from the al-Sekah area in Beit Hanoun were inside the car which was parked in front of the house of Ahmed’s father.  As a result, the car was completely destroyed, and the bodies were maimed completely.  The house of Mohammed Jom’aah al-Za’anin, the victim’s late father, was severely damaged with windows being smashed, a number of doors being broken and the walls being cracked.

An Israeli military spokesman confirmed that Ahmed al-Za’anin was targeted and killed. He added that Al-Za’anin had been responsible for launching rockets over the past few days at the Israeli towns adjacent to the Gaza Strip and was also responsible for planning to carry out military operations against military and civilian Israeli targets.

This attack is the second of its kind in 2014. On Sunday 19 January 2014, an Israeli drone fired a missile at a motorbike that was being driven by an activist of the al-Quds Brigades (the armed wing of Islamic Jihad) in the northern Gaza Strip town of Jabalya. The activist was seriously wounded, while a passing child was injured.

PCHR is deeply concerned over the latest Israeli escalation, and:

1. Strongly condemns such Israeli crimes in the occupied Palestinian territory (oPt), which reflects Israel’s disregard for the lives of Palestinian civilians;

2. Reiterates condemnation for extra-judicial executions committed by Israeli forces against Palestinian activists, which serve to escalate tension in the region and threaten the lives of Palestinian civilians; and

3. Calls upon the international community to immediately act to stop these crimes, and reiterates its call for the High Contracting Parties to the Fourth Geneva Convention to fulfill their obligations to ensure protection for Palestinian civilians in the oPt. 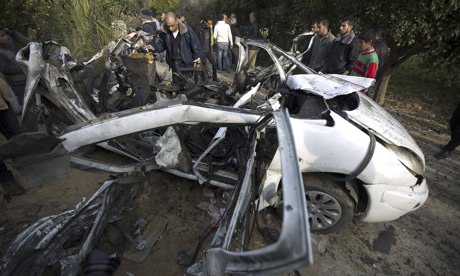