Gaza: Life beneath the drones 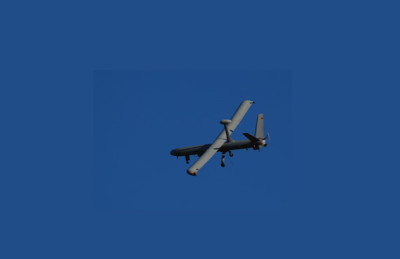 A Hermes 450 drone – manufactured by Elbit (Photo by Corporate Watch)

In the Gaza Strip there is no escape from Israel’s drones. Nicknameed ‘zenana’by Palestinians because of their noisy buzzing, the drones (remote control aircraft) are omnipresent. Sometimes they are there to carry out an extra judicial killing and sometimes they are there for surveillance. If you are on the ground you do not know which and you have no choice but to try to ignore them.

Since Israel’s partial withdrawal in 2005, there is not a permanent presence of Israeli soldiers in the majority of the Gaza Strip (although soldiers are a presence in the ‘buffer zone’, off Gaza’s coasts and during frequent invasions), but there is no doubt that the occupation is still brutally enforced -only now a lot of of it is done remotely from the skies. 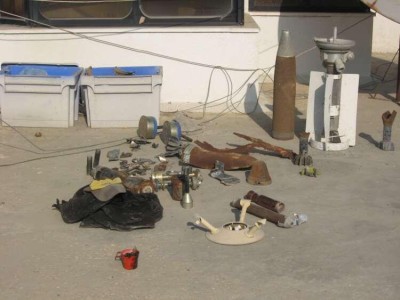 A selection of the weaponry fired on Gaza over the years collected by Al Mezan Centre for Human Rights, Photo taken by Corporate Watch – November 2013

During our visit to Gaza in November 2013, Corporate Watch talked to the Al Mezan Center for Human Rights, to survivors of drone attacks and to just about everyone we met, about the changing impact of drones on the people of Gaza.

Al Mezan is a monitoring organisation working for the protection of human rights in the Gaza Strip. As such they keep extensive records detailing all violations, with separate databases for external and internal abuses. Their files record the number of deaths, injuries and properties destroyed as well as anything that can increase the understanding of each attack, including the type of weapon used. Their initial information is collected by fieldworkers who go to the scene of an attack, assess the evidence and talk to eyewitnesses and people affected. Established in the late nineties, Al Mezan has been recording drone strikes for as long as they have happened in the Strip. This is not always a straightforward task.

According to the UK research group Drone Wars UK, the Israeli military has never, despite the mounting evidence to the contrary, admitted publicly that it is using armed drones in Gaza.[1] According to Yamin Al Madhoun, one of Al Mezan’s fieldworkers, people were confused when evidence of drone strikes first started to be noticed around the year 2000. It was a new kind of warfare which changed everything: “When they started to use the drones we did not know what drones were”, Yamin said. “We did not understand. Explosions just seemed to come out of nowhere. It took us about a year to start learning about drones”.

At scenes of drone strikes fieldworkers used to find a golden cable, something that seemed to be attached to the missile, but this has now changed, with the main signifier of drone use being the type of destruction caused and the kind of target being hit. Drones are most commonly used for ‘targeted assassinations’, or extra judicial killings, of individuals and for a practice referred to as ‘roof knocking’. Roof knockings are used when the Israeli military wants to totally destroy a house but starts with a drone attack targeting the roof as a warning for the people inside to leave.[2] These attacks are usually followed by F16 strikes on the same or nearby buildings about three minutes later. If the people fleeing are lucky, this warning is enough to save their life. But often it is not.

Although there are different kind of missiles fitted on drones the strikes usually leave a hole of about 10cm on the target and cause partial destruction to buildings, making it possible to distinguish between drone, F16 and Apache strikes.

In Al Mezan’s experience Israel’s increased reliance on drones does not mean less casualties in Gaza. “When Israeli forces started to use the drones the number of people killed increased”, Yamin said. “This is a cheaper weapon for Israel to use so drones give the Israelis an opportunity to attack more and more. The people who manufacture the drones facilitate more attacks by the Israelis because they are cheaper and the drones are in the sky all the time, they don’t even have to plan the attack properly beforehand”.

For people on the ground it is almost impossible to foresee a drone attack. Although the buzzing sound of the drones is recognised by everyone, and some people report that the noise of the drone gets louder before a strike. “What can we do?” Yamin said. “When we hear an Apache or an F16 we know that it will only be there for a while and we can go into our houses for safety. Drones are in the air 24 hours a day so the people don’t hide from them. We can’t hide 24 hours a day”. On rare occasions the survivors have reported being able to see the drone before it fired, but often the a missile strike is the first warning.


Because of the secrecy about Israel’s drone use in the Gaza Strip it is hard to get officially confirmed figures of the exact number of casualties caused by drone attacks, but everyone monitoring the situation has no doubt that the proportion of Israeli attacks which are carried out by drones is increasing. According to Mohammed Mattar, data entry analyst at Al Mezan, the first time the organisation was able to be sure that deaths were caused by an armed drone attack was in 2004, when two people were killed. In 2009, the number of people killed by drones was 461, nearly half of the total number of people killed that year. In 2012, the year of the Israeli invasion known as ‘Pillar of Cloud’, 201 out of a total of 255 people were killed via remote control by drones. These statistics do not include people killed by other weaponry in attacks aided by drone surveillance or people injured in drone attacks.

What quickly becomes clear when you talk to people in Gaza is that the alarming numbers of deaths do not tell the full story. The psychological impact of these weapons is everywhere. In al-Quarara outside Khan Younis we talked to a family who go inside their house every time they hear a drone in the sky after their daughter was arbitrarily killed in a drone strike in 2009. In Meghazi our interview with the head of the refugee council is interrupted when his 10 year old son comes home from school and tells us that there was a drone buzzing above his classroom in the morning, making it hard for the children to concentrate on their schoolwork.

The most common complaint of all is about the drones’ interference with the TV reception -whenever the signal breaks up you know that it is because of Israeli drone activity in the area. “I like to watch Arabs Got Talent” Rida, our translator at Al Mezan says shyly, “but lately I have not been able to because of the drones”. It might not sound like much, but in a place like Gaza, with its closed borders and 12 hour power cuts, it is a final reminder that even the tiniest bit of escapism is at the mercy of the occupation forces.

We will be publishing the personal stories of families affected by drone attacks over the coming months.

With alarming increases in Israeli use of drones being reported by human rights organisations Al Mezan and Palestinian Center for Human Rights, and with drone technology developed by Israeli companies such as Elbit and IAI being sold as ‘battle tested’ in Gaza to almost 50 countries, it is urgent that we increase anti-militarist boycott, divestment and sanctions actions. We can not allow Israel to continue to use its repression of Palestinians as a sales pitch to sell killer drones to war criminals around the world.

In the UK the Ministry of Defence has bought drones from both Elbit and IAI and is working with Elbit to develop the Watchkeeper drone, modeled on the Israeli Hermes 450. The Watchkeeper programme is carried out by U-TacS – a joint venture company owned by Elbit Systems and Thales UK. Although the Watchkeeper is currently being described as a a surveillance drone, Drone Wars UK has pointed out that during the 2011 DSEi arms fair in London, Thales exhibited the Watchkeeper with missiles attached.

Further reading: Both Drone Wars UK and War on Want have recently published detailed reports about Israel’s killer drones with a lot of information for action.

Locations involved in the Watchkeeper programme: