Israeli forces regularly exercise brutal and irrational behaviour in the H2 area of Khalil (Hebron), which is under military control. 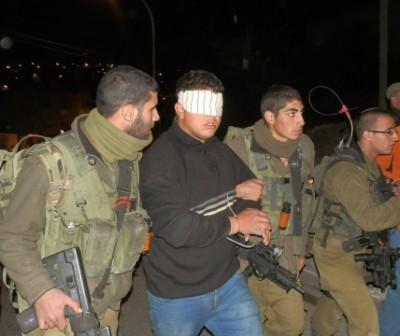 An example of this treatment took place on Saturday 30th November, when 7 Israeli soldiers reacted to a group of Palestinian youth throwing stones at an illegal settlement by launching stun grenades through the souk (market). International activists witnessed the Israeli soldiers running into the market and indiscriminately throwing stun grenades, causing panic and distress amongst people in the street.

When questioned by internationals, Israeli soldiers admitted that it was a “mistake” to use their weapons in this way and said they do not “enjoy” their actions. However this does not alter the reality for Palestinians living in Khalil, who are subjected to these excessive reactions on a regular basis.

This behaviour is consistent with other recent events, for example the treatment Palestinians often experience on arrest. On Friday 29th November two Palestinians were arrested, supposedly accused of throwing stones. They were held at a checkpoint, blindfolded, handcuffed and marched to Tel Rumeida military base. It is understood that the two men have yet to be released.

Conversely, when Israeli Border Police witness settler violence they readily ignore it. This was highlighted by an incident on Saturday 30th November when a police officer looked on as an international activist was kicked by an illegal settler.

The regularity of this unjust behaviour towards Palestinians by Israeli forces serves to intensify the daily impact of the Occupation.