Palestinian farmer injured by Israeli gunfire in the Gaza Strip 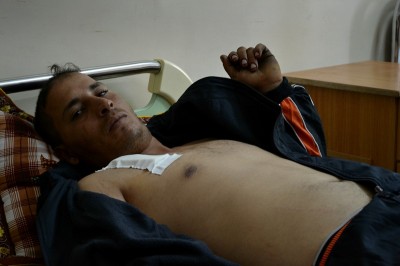 On Wednesday, 13th November, gunfire by Israeli occupation forces injured a Palestinian farmer near al-Maghazi refugee camp, in the center of Gaza strip.

Mneifi Abu Abdullah, age 25, was working with three other farmers about 600 meters from the separation barrier.

Abu Abdullah is a worker who ears 30 shekels per day in the fields.

Farmworkers near al-Maghazi are used to hearing gunshots. The Israeli military presence is constant in areas along the barrier.

On Thursday, some of Abu Abdullah’s uncles, as well as another farmer present during the shooting, visited his room in al-Shifa hospital.

The witness said he suddenly heard three shots, injuring Abu Abdullah in at his right shoulder, around 2:50 pm. Another bullet struck near his feet.

The farmers transported Abu Abdullah roughly one kilometer before reaching an ambulance that brought him to al-Aqsa Martyrs hospital in Deir el-Balah.

The witness added that he had not seen Israeli soldiers, but military vehicles had been moving along the barrier.

On the same day in Deir el-Balah, another farmer, from Abu Daher family, was wounded in his leg by Israeli gunfire and rushed to al-Aqsa Martyrs hospital.

Abu Abdullah is married and has two children. His work in the fields is his family’s only source of livelihood.

He was transferred from al-Aqsa Martyrs hospital to al-Shifa hospital. The bullet entered and exited his shoulder. He needs surgery, as the bullet severed a nerve.