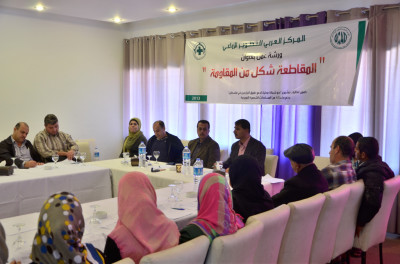 On Monday, 25th November 2013, a conference on the Boycott, Divestment and Sanctions (BDS) movement against Israeli apartheid, colonization and occupation was held in Gaza City by the Arab Center for Agricultural Development (ACAD) and Norwegian People’s Aid (NPA).

About 43 people, 22 women and 21 men, attended. They were farmers and representatives of the civil society and national organizations in the agriculture sector in Gaza, NPA representatives, and BDS activists.

“This kind of boycott of Israel is historical in Palestine and has succeeded in making changes in the past,” said ACAD director Muhsen Abu Ramadan. “The South African anti-apartheid movement succeeded using a boycott strategy. We should boycott and also ask for divestment from Israel in general, and also settlements. We also need to promote local products and to encourage investments in Palestinian products, as this will complement the boycott. We have to use international replacements for Israeli products if we don’t have a Palestinian product. Boycott is not only about trade but also educational centers. Israeli universities are used for research to kill Palestinians. Experience of the boycott movements has shown that it is a good way to affect Israel. It is hard to boycott here in Gaza because of the limited options, but we have to encourage the culture of boycotting. We have also to boycott some of the facilities and traders who deal with Israelis, because Israel tries to show that the conflict is just between politicians and not popular among the people. So, they tell other countries, why are you boycotting us when even Palestinians are not boycotting us? Some farmers’ unions in Europe adopted the boycott movement, and we can have a huge influence by boycotting agricultural products. We have to take care about Israeli procedures that intend to create normalization between Palestinian and Israeli products. We demand more serious positions against importing products from Israel at all, not just from settlements. We have to defend the rights of our farmers and their right to import and export products.”

He pointed out that “boycott is a national strategy for taking our rights, especially in the absence of compliance with international law with regard to Palestinians. This is a way to punish Israel, which is using the Palestinian market to make it just a consumer market so they, Israel, can benefit from it. The Israelis intend to create normalization between the occupied and the occupier. We found that 51 Israeli and international companies invest their money in settlements. We have contacted these companies and we contacted the Norwegian pension fund to boycott these companies. One of the companies is G4S , the British/Danish security firm which has held a contract to provide equipment and services to the Israeli prison system and checkpoints since 2007. Caterpillar provides the Israeli military with weaponized bulldozers used to illegally destroy homes and orchards of Palestinian families. And they are the very same bulldozers as the one that killed a 23-year-old American peace activist, Rachel Corrie, in Rafah in 2003, when she tried to protect the home of the Nasrallah family. Hewlett Packard, HP, provides the technology for Israeli gunboats that kill Palestinian fishermen, and provide the tracking system that controls all movements of Palestinians at checkpoints throughout the West Bank. We demand to talk with the investment funds in Europe, and that they boycott all these companies. Sadly, some Arab countries invest in them.”

He asserted the importance of joining the BDS movement, refusing to buy any Israeli product from the local markets and encouraging the national products. “By that, we can support our economy and destroy the Israeli economy.”

“We don’t have real experience in BDS as UAWC, or any other civil society organizations in Gaza,” said Sa’ad Ziada, project coordinator for the Union of Agricultural Work Committees (UAWC). “We just have some activities boycotting the Israeli products.”

“We established the Palestinian Day for Agriculture, held on 9th February 2013. We have been discussing how we can export our products without the intervention of Israeli companies. We have to create a long-term strategy and we need to talk with all factions in order to encourage them to create a culture of boycotting Israel. We want to make pressure on the Palestinian government to support the idea. We know that it’s really hard to boycott Israel, especially in Gaza, because most of our basic goods are from them, but at least we can boycott the products for which we already have national alternatives. The Israeli occupation is establishing a new form of slow killing, such as with this closure, the lack of jobs, electricity, unclean water, bad education, and using poisons in agricultural materials such as fertilizers and pesticides. That leads to the killing of Palestinians slowly, over the long term, not directly with bombs, but in another way. 95 million dollars is the profit from Israeli goods imported into the Gaza Strip, more than four million dollars per year. So that means if we boycott Israel, we can really affect the Israeli economy and change their policy towards us.”

“Of course the boycott is an important type of resistance. Not all the people are going to do armed resistance, but they can do this kind of resistance.”

Zaid Shuabi, outreach officer of the Palestinian BDS National Committee (BNC), gave a report by Skype from the West Bank.

He started his speech with a brief introduction to the BNC, its history, its start and its role and activities in Palestine.

Efforts to coordinate the BDS movement, which began to grow rapidly after the 2005 call was announced, culminated in the first Palestinian BDS Conference held in Ramallah in November 2007. Out of this conference emerged the BDS National Committee (BNC) as the Palestinian coordinating body for the BDS movement worldwide.”

The BNC’s mandate and role is:

• To strengthen and spread the culture of boycott as a central form of civil resistance to Israeli occupation, colonialism and apartheid;
• To formulate strategies and programs of action in accordance with the 9 July 2005 Palestinian Civil Society BDS Call;
• To serve as the Palestinian reference point for BDS campaigns in the region and worldwide;
• To serve as the national reference point for anti-normalization campaigns within Palestine;
• To facilitate coordination and provide support and encouragement to various BDS campaign efforts in all locations.

The BNC’s main activities include:

• Campaigning with BDS activists locally and worldwide by preparing and disseminating BNC statements; public speaking; organizing the annual Global BDS Action Day on 30 March (Palestinian Land Day);
• Advocacy by briefing and lobbying policy makers;
• Monitoring and Rapid Response by means of BNC calls for action against projects and initiatives which amount to recognition of or cooperation with Israel’s regime of apartheid, colonialism and occupation (i.e., normalization);
• Media Outreach in Palestine and abroad, based on a professional media strategy;
• Coordination with BDS activists locally and worldwide, including preparation of regional and international organizing meetings and conferences;
• Awareness Raising and Training for activists and organizations about BNC analysis, standards and BDS campaign work; through workshops, BNC information materials and the BDS campaign website;
• Developing the BDS movement in Arab countries;
• Research and BDS Strategy Development.

In the West Bank, they have made some progress boycotting Israel, although they have faced many problems with the Israelis. Shuabi talked about the boycott in many countries and how Palestinian traders are forced to buy Israeli goods, sometimes from settlements, so Israel can argue with Western audiences that Palestinians themselves buy from Israel.  He explained efforts to export goods through companies boycotting Israel. This project has made good progress outside Palestine.

After the speeches, there was an animated debate among organizers and participants.