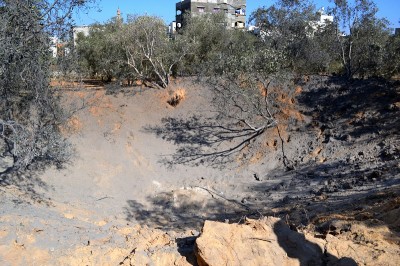 On the morning of Monday, 28 October, the Israeli air forces bombed agricultural land in the north of Gaza City.

The airstrike took place at 9:25 am. An F-16 fighter jet bombed an area planted with olive trees on Mukhabarat Street, near Soudanya.

The bombing created a huge crater. The land belongs to the Shohaber family, which produces oil from the olive trees. The family also owns a trucking company that transports materials from the Karem Shalom checkpoint into the Gaza Strip.

Hazem Shohaber, owner of the land, told me his house was damaged in the bombing. His family has only lived in the new home for three months.

“I was sitting behind the wall around the yard when the bombing took place,” Hazem said. “I was shocked. I was not able to do anything. Thank God my children were not on the land. They were in school. They usually play here.” 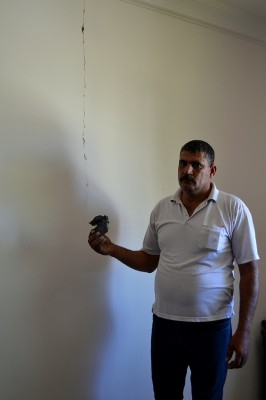 Hazem has three sons  and three young daughters who were in school at the time of the bombing. The explosion cracked the walls of his house. All its windows, as well as those of adjacent buildings, shattered.

A few meters away from the bomb site is a primary school for girls.

“The girls were in class,” Hazem said. “They fled. The situation was terrible. Teachers could not calm them. The ambulances came. Everyone feared that children had died in the explosion.”

A few meters away from the bomb site is a primary school for girls.

“The girls were in class,” Hazem said. “They fled. The situation was terrible. Teachers could not calm them. The ambulances came. Everyone feared that children had died in the explosion .”

Hazem’s wife offers a cup of coffee. His daughter, Farah, age six, hides under the table, looking shocked. Who knows how many other children will do the same today?

The ceasefire of 21 November 2012 established that the Israeli military forces should “refrain from hitting residents in areas along the border” and “cease hostilities in the Gaza Strip by land, by sea and by air, including raids and targeted killings.”

But Israeli military attacks by land and sea have followed from the day after the ceasefire,, and Israeli warplanes constantly fly over the Gaza Strip. In areas by the Israel-imposed “buffer zone,”Israeli forces have killed seven civilians since the end of the “Pillar of Defense” military offensive. At least 124 others have been wounded.

These attacks against the civilian population of Gaza continue, but are met only with silence by the international community. 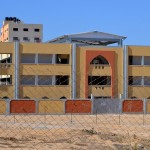 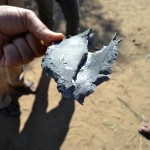 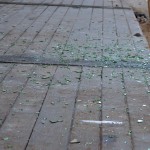