New
Home / Gaza / Photo: A freed detainee joins his mother at the Gaza protest she began 18 years ago

Photo: A freed detainee joins his mother at the Gaza protest she began 18 years ago

Ibrahim Baroud joined his mother, Ghalia Baroud, or Um Ibrahim, at Gaza’s weekly sit-in for Palestinian prisoners, which she co-founded, on Monday morning. 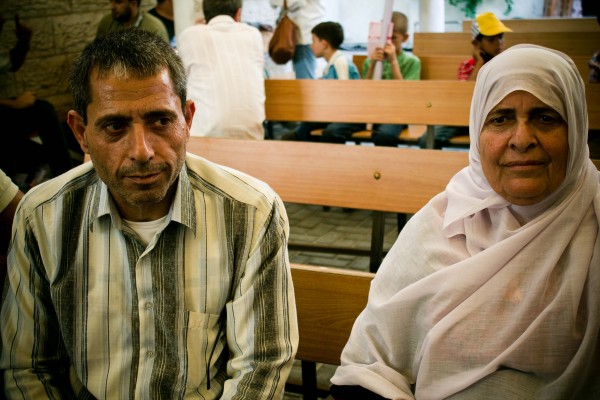 Baroud, a former Palestinian detainee, was captured by Israeli forces on 9 April 1986, at the age of 23. He was held for 27 years, including seven in solitary confinement.

Um Ibrahim launched the vigil in the International Committee of the Red Cross (ICRC) courtyard in 1995 with Handoumeh Wishah, or Um Jaber, the mother of four detainees, including Jaber Wishah, who was held for over 14 years.

Wishah, a physics lecturer and a political and military leader in the Popular Front for the Liberation of Palestine, was captured by Israeli forces on 5 June 1985. They released him on 9 September 1999, along with 198 other detainees, in partial implementation of the Sharm el-Sheikh Memorandum signed with the Palestine Liberation Organization five days earlier.

“I had this idea to hold a vigil with photographs of the prisoners, to make sure they were not forgotten,” Um Jaber told the Palestinian Center for Human Rights (PCHR) in 2008.

“It was just the two of us standing outside the ICRC the first time – but we knew the next week there would be three or four of us, and then, slowly, more mothers would come.”

Um Ibrahim celebrated her son’s freedom on 8 April 2013 after his completion of an Israeli military court’s sentence for membership in Palestinian Islamic Jihad and participation in its armed resistance.

The timing of his release, on a Monday morning, was convenient, as Baroud made his first stop in the Gaza Strip, before his home in the Jabalia refugee camp, at the ICRC.

Previously, Israeli forces barred Umb Ibrahim from visiting her son for 16 years, first due to unspecified “security reasons,” then as part of a complete ban on family visits from the Gaza Strip imposed on 6 June 2007.

The ADDAMEER Prisoner Support and Human Rights Association said that “the absolute prohibition on family visits is designed to demoralize and punish prisoners’ families, and by extension the general population in Gaza, for their political choices in 2006 and for the June 2006 capture of Gilad Shalit, making the policy a clear case of collective punishment, a war crime for which Israel should be held responsible.”

In 2007, prior to the ban, Um Ibrahim received approval for one visit, but turned back after Israeli forces demanded she submit to a strip search.

“I finally got permission to visit him in jail in Israel last year, and the ICRC escorted me to Erez Crossing,” she told the PCHR. “But the Israelis ordered me to strip down to my underwear, and I refused. So they sent me back to Gaza.”

“They [the Israelis] had seen everything, even my bones,” she added. “They claimed it was for security – but I am entitled to protect my dignity and my rights.”

The Israel measures sparked a month of protests by Palestinian detainees in April 2010 and a mass hunger strike in April and May 2012, which finally ended the five-year ban on Gaza Strip visits.

“All Palestinians are dangerous for them [Israelis],” Um Ibrahim told Le Monde before her son’s release, which she called “a national wedding and a popular happiness.”

At the beginning of September, Israeli forces held 5,007 Palestinian political prisoners, according to ADDAMEER. 400 were from the Gaza Strip.

Many of them remain unable to receive visits from their families because of “security” claims, an ongoing ban on visits by Gaza Strip children ten and older, and other Israeli policies.

Hundreds of their relatives and supporters continue to gather in the ICRC every Monday morning, week after week, eighteen years later.