Since last week the village of Ni’lin is being targeted daily by midnight raids from the Israeli occupation forces. The soldiers have been shooting tear gas into people’s homes while they are sleeping. Only two people have been arrested but ten houses have been invaded by the soldiers. 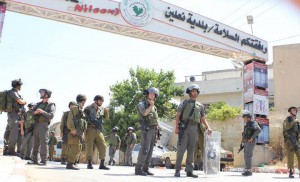 The arrested are Naha Nafi, 21, and Tariq Kawaja, 24. Another three young men were sought after but could not be found.

The situation has escalated in the last few days. Israeli soldiers have started blocking the entrances of Ni’lin preventing people from entering or leaving the village. For the villagers who commute to Ramallah for work or studies this collective punishment has caused huge problems.

However, 11 pm on Saturday night a large number of Israeli jeeps invaded the village, seemingly just to cause disturbance. The soldiers began harassing villagers, firing their rifles without any apparent reason. As youths gathered to drive the soldiers out of the village they were directly fired upon with rubber coated steel bullets. One young man was hit in his leg and many bystanders suffered from tear gas asphyxiation. Also at this occurrence tear gas was fired into the homes of sleeping villagers.

At present the entrances to Ni’lin is still being blocked by the Israeli military. The villagers are awaiting their next move with anxiety.